Chillin' With Abe Takes On A New Meaning 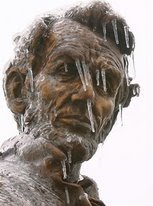 My previous post was titled “Chillin‘ With Abe,” informing my readers that I was heading to the beach for some much-needed relaxation and fun with my friends and their family. I certainly didn’t mean “chillin‘” as in “freezing.”

The five of us ventured to Cape Hatteras, N.C., which is one of the best places on the Eastern seaboard for fishing, serenity, and beauty. Average temperature this time of the year is in the middle 60’s. Unfortunately, we were met with chilly temps in the low to mid 40’s and gale force winds (from 25-35 mph) nearly every day. It ruined fishing for the most part and the frigid conditions meant that we never needed any sunscreen.

But all was not lost. Even on the beach, I was never far from Lincoln history. We visited a small museum about shipwrecks along the Outer Banks of North Carolina. One of the most famous shipwrecks is the U.S.S. Monitor, the Union ironclad ship which sank on December 31, 1862 about 17 miles off the North Carolina coast. It was rediscovered in 1973 and is now preserved as a federal Marine Sanctuary. The U.S. Navy approved construction of the ship in 1861.

The museum also has an exhibit about the hunt for the Alligator, which was the first U.S. Navy submarine. I had never heard of this submarine, which was never commissioned. It also was lost at sea off the coast of North Carolina. The Alligator was observed by Lincoln during a test of its capabilities on March 18, 1863. The hunt continues for the Alligator.

Our journey home took a couple of unexpected stops, one in Washington, D.C. We were fortunate enough to be able to visit the original Star-Spangled Banner at the National Museum of American History. This flag was the one which flew over Ft. McHenry in Baltimore during the British bombardment of Baltimore during the war of 1812. It has undergone a decade-long restoration and was put on display just last week at the remodeled museum.

We were also very fortunate in being able to see an original copy of The Gettysburg Address, which is on display through January 4, 2009. This is the “Bliss” copy of the Address and is rarely displayed to the public. It’s current permanent home is the Lincoln Bedroom in the White House.

Finally, my travelling companions and I stopped in Sharpsburg, Maryland for a tour of the Antietam National Battlefield. It was, of course, the scene of the single bloodiest day of The Civil War, with nearly 20,000 deaths and other casualties on September 17, 1862. I’d never before visited Antietam and I found it just as moving as a visit to Gettysburg. It was at Antietam that Lincoln visited General George McClellan in an effort to prod him into action. Of course McClellan was eventually fired due to his continuous inaction and failure to destroy Lee’s army.

I’ll be posting more in-depth about the Alligator, the Gettysburg Address, and Antietam in coming days. I didn’t expect that my vacation would be so heavily “Abe oriented” but I’m of course happy it was.