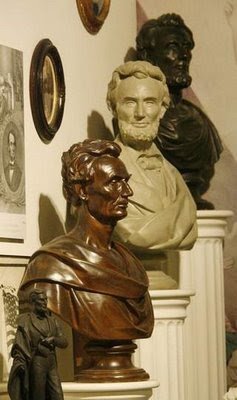 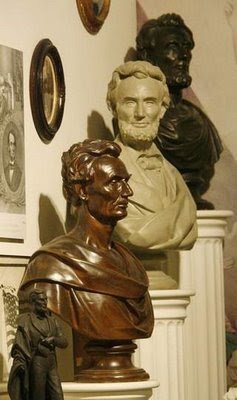 Today’s Indianapolis Star newspaper brings the happy news that the famed collection from the now-defunct Lincoln Museum in Fort Wayne, Indiana will apparently remain in Indiana after all. A news conference is scheduled to be held today at 11:00 a.m. Eastern Time at the Indiana State Museum in Indianapolis to make what’s termed a “major announcement.”
The consortium between the State Museum, the Allen County (Indiana) Public Library, and the Indiana Historical Society seems to have beat out major competitors such as the Smithsonian Institution and the Abraham Lincoln Presidential Library and Museum in Springfield, Illinois.
The Indiana consortium proposed that the three-dimensional objects (like the busts pictured above) would be housed in the State Museum, while documents and books go to the library. The Historical Society would preserve and maintain the rarest of the documents, including one of the 25 known copies of the Emancipation Proclamation signed by Lincoln.
The Fort Wayne collection, previously owned by the Lincoln Financial Foundation, contains a massive amount of artifacts related to Abraham Lincoln. The collection contains at least 230,000 items, including 18,000 books and 340 documents signed by Lincoln. Countless other items include busts, photos, paintings, and other ephemera. The collection is considered to be priceless.
I’ve posted several times about the closure of the Lincoln Museum in Fort Wayne. This was the original announcement , while this post dealt with some of the ramifications of the closure. At the time of the closure, it was not known what would end up happening to the collection.
While the main competitors were indeed formidable, I think it’s wonderful and just that the collection remains in Indiana, where Abraham Lincoln spent his formative years. Congratulations to the Hoosier State! Well done!