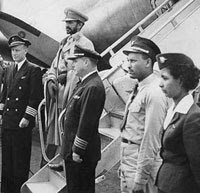 Haile Selassie I, Emperor of Ethiopia, had been the central figure in the Rastafarian faith since the foundation of the movement in the early 1930s. The indigent population in Jamaica saw him as God incarnate. He was the only independent black monarch in Africa; by tradition, a descendent of King Solomon and the Queen of Sheba. To Rastafarians he is still a Messiah figure fulfilling certain biblical prophesies: he was the ‘King of Kings’ and the ‘Conquering Lion of Judah’.

It is no surprise that when the Emperor visited Jamaica on 21st April 1966, a rapturous crowd of thousands of Rastafarians received him. Taken aback by the fervour of their welcome, the Emperor returned to the plane until he was given assurances that he would be protected from the throng. The visit continued with the Emperor meeting the ageing Prime Minister, Sir Alexander Bustamante, and receiving an honourary degree at the University of the West Indies.

April 21st has become a sacred date to Rastafarians, celebrated every year as ‘Groundation Day’ when they hold a Nyahbinghi meeting, during which they celebrate His Imperial Majesty with music, chanting and prayer.

>To find out more about the Emperor’s visit and Rastafarianism in general, visit the Rastafari section of the Jamaicans.com web-site.