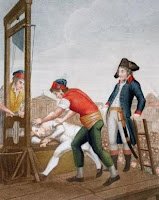 On 25th April 1792, a highwayman called Nicolas-Jacques Pelletier received the dubious honour of being the first person executed using the guillotine. The device was named after Joseph-Ignace Guillotin who was not – as is often thought – the inventor of the machine. In fact, he was a physician who petitioned the National Constituent Assembly, of which he was a member for Paris, in October 1789 with six articles of penal reform. The second of these read:-

In all cases where the law imposes the death penalty on an accused person, the punishment shall be the same, whatever the nature of the offence of which he is guilty; the criminal shall be decapitated; this will be done solely by means of a simple mechanism.

It was not until 1791 that the Assembly approved a motion that everyone condemned to death should be dispatched by having their head severed, and established a committee to review possible methods of decapitation. A year later, a German harpsichord maker named Tobias Schmidt produced the first prototype device under instruction from the head of the committee, the King’s physician, Antoine Louis. He continued to refine the design while testing the machine on dead animals and human cadavers. One key feature that he added to increase the effectiveness of the guillotine was to have an angled blade.

The guillotine was not the first mechanism to employ a falling blade or weight to decapitate criminals. Records exist of similar devices being used in the fifteenth-century at Halifax in England (‘The Halifax Gibbet’) and from 1564 in Scotland (‘The Maiden’). According to tradition ‘The Halifax Gibbet’ had been in use since the thirteenth-century. These certainly formed the blueprint for the French design.

Despite being seen as a more humane method of execution than the axe or the sword, the guillotine became a symbol of Revolutionary Terror. Thousands of victims went to “look through the Republican Window” (as it was called), including King Louis XVI and his wife Marie Antoinette. Many revolutionaries were also sent to the ‘National Razor’ (as it was also known): George Danton, Camille Desmoulins, Jacques Hébert, and the man most commonly blamed for the Terror, Maximilien Robespierre. Dr Guillotin himself only narrowly escaped the device that bore his name. Towards the end of the Terror, the authorities arrested him after he received a letter from Count Mere requesting that Guillotin look after the Count’s wife and children following his execution. Fortunately, the doctor was released after the fall of Robespierre in 1794.