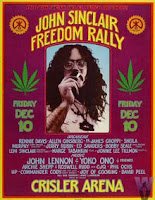 Born in Flint, Michigan, in 1941, John Sinclair became a major figure in the late 1960s counter-culture movement. He wrote for the underground press, organised free festivals and managed the garage rock band MC5. In 1968 he co-founded the White Panther Party with Lawrence Plamondon and his partner Leni Arndt, in response to an interview in which the co-founder of the Black Panther Party, Huey P. Newton, asked what white people could do to support the Panther’s cause.

In July 1969, Sinclair was convicted of giving two marijuana joints to an undercover policeman. The presiding judge, Robert Colombo, sentenced him to between nine-and-a-half and ten years in prison. While incarcerated he wrote books, continued to direct activities of the White Panther Party, and engaged in an appeal against his conviction, questioning the constitutionality of Michigan’s draconian marijuana laws.

His cause attracted widespread support, culminating on on 10th December 1971 with the “Free John Now Rally” at the Crisler Arena in Ann Arbor. The event was opened by the beat port Allen Ginsberg and featured music from John Lennon and Yoko Ono, Commander Cody and His Lost Planet Airmen, Stevie Wonder, Phil Ochs and Bob Seger. Abbie Hoffman (co-founder of the Youth International Party), Jerry Rubin (social activist), Bobby Seale (chairman of the Black Panthers) all made speeches, as did Sinclair himself, via a remote hookup.

The day before the event, the Michigan Senate had approved a bill to cut the maximum penalty for marijuana from ten years to ninety days. As a consequence the 15,000 who attending the eight hour concert were confident that Sinclair would soon be released. Indeed, on 13th December 1971, the Michigan Supreme Court ruled in favour of Sinclair and he was released from prison.

The Bentley Historical Library of the University of Michigan houses the John and Leni Sinclair Papers, and hosts a biography of John Sinclair on its website.