The Death Of Abraham Lincoln 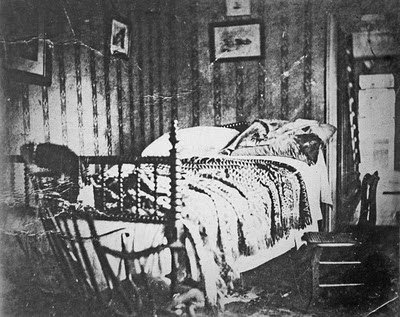 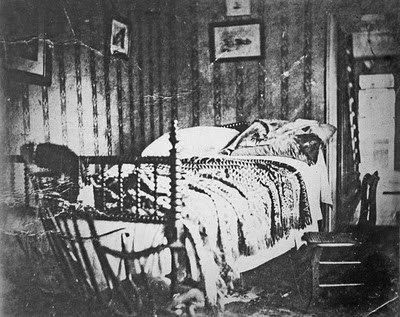 (Author’s Note: Beginning on April 14, 2010 and continuing over the next several weeks, I’ll be running a series of posts documenting the assassination, death, and ensuing funerals of Abraham Lincoln. This year marks the 145th anniversary of this tragic event. Please follow along as I recount one of the darkest times in U.S. history.)

Abraham Lincoln lay dying on a bed too small for his 6’4″ frame in a boarding house he had never before visited. Just a few short hours before, on April 14, 1865, he had been watching Our American Cousin at Ford’s Theater, accompanied by his wife Mary, and their young guests. At the very moment of the funniest line in the play, John Wilkes Booth entered the presidential box, aimed a .44 caliber Derringer at the back of Lincoln’s head and fired.

The unconscious president had been carried across the street to the Petersen boarding house, because his attending doctors felt that he would not survive Washington’s rough streets for the ride back to the Executive Mansion, as the White House was called in those days.

Now in the early morning hours of April 15, the doctors did what they could to comfort the dying president, who had been stripped of his clothing. They warmed Lincoln with hot water bottles and mustard plasters, and placed extra blankets on his body. They kept the head wound open from clots, for they had noticed that his breathing would be strained if the wound clotted.

Government officials entered the room throughout the night to pay their respects. Vice-President Andrew Johnson visited, but did not stay more than a few minutes. Senator Charles Sumner, a close friend of the Lincoln’s, stayed much longer through the night. When he first arrived he sat beside Lincoln, and held his hand as he spoke softly to the president. Robert Todd Lincoln stood next to Sumner through the long night, weeping at times on Sumner’s shoulder.

Mary Lincoln had arrived at the boarding house along with her husband and alternated between sitting by her husband and waiting in another room for the end. She plead with Lincoln to awaken, with the doctors to shoot her too, and expressed her wish that her younger son, Tad, might see his father before he died. Tad was never sent for as everyone else present agreed that it was not a good idea. At one point during her vigil, Lincoln’s breathing became loud and labored, she screamed and fainted. With that, Secretary of War Edwin Stanton came back into the room and ordered Mrs. Lincoln removed and not be permitted to return. With that, she was removed and never again saw Lincoln while he was alive (nor when he was dead).

Stanton had been busy since the shooting essentially running the country. He interviewed witnesses, ordered a manhunt for the assassin to begin, telegraphed the horrible news to New York and Chicago police, asking them to send detectives. Through the night, he worked ceaselessly, occasionally breaking away from his efforts to stand by the president he had grown to almost love after detesting him in earlier years when they were both lawyers.

By 6:30 on the morning of April 15, 1865 the end was drawing near for Lincoln. His breathing was more labored and shallow, his pulse grew fainter. A prayer was offered by the Lincoln family pastor (Lincoln attended, but never officially joined any church).

Abraham Lincoln died at 7:22 a.m. as a gentle rain fell in Washington. When the end came, Stanton buried his face and wept for his president and friend. He then said the famous words “Now he belongs to the ages.”

Upon Lincoln’s death, Andrew Johnson was almost immediately sworn in as the 17th President of The United States. While Lincoln’s body was prepared for transporting back to the White House, Mary and Robert Lincoln rode in a carriage back to there as well. As Mary saw Ford’s Theater once more, she exclaimed “That dreadful house, oh that dreadful house!”

Lincoln’s body left the Petersen house in a temporary coffin and was taken to the main guest room at the White House. There an autopsy was performed, and the bullet which changed the course of U.S. history was found. It had been flattened during its travel through Lincoln’s brain and had come to a rest just behind his eye. Once the autopsy was complete, Lincoln’s body was embalmed in preparation for what turned out to be not one, but twelve funerals to be held in cities from Washington to Springfield over the next few weeks. For those who are interested, you may find the autopsy report at this site of the National Library of Medicine.

The image I’ve included in this post is a reproduction of the only known photo taken of the Lincoln deathbed scene. It was taken just minutes after Lincoln’s body had been removed. Yes, that is one of the blood-soaked pillows still present on the bed. The original photo, torn and fragmentary, was not discovered until 1961. It’s striking how it shows the room and bed just as they were. A boarder at the Petersen house took the photo in order to record for posterity the horrors of the night.

Lincoln’s remains would stay in Washington for nearly one more week while the capital prepared to say a huge farewell to the martyred leader. In my next post, I’ll tell the story about the massive state funeral for Abraham Lincoln in Washington, and how the rest of the nation mourned. It’s a fascinating story. I hope you’ll join me.