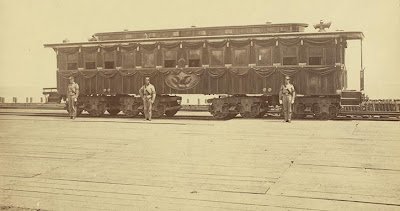 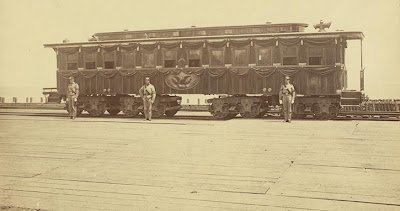 The persons chosen to escort the body of Abraham Lincoln to the funeral train in Washington gathered early in the Capitol rotunda on the morning of April 21, 1865. In the crowd were new President Johnson; Lt. General Ulysses S. Grant and his staff; other high-ranking generals and admirals; the pall-bearers; and clergy members. After a brief prayer was said, twelve sergeants carried the casket to the waiting hearse for the short drive to the main depot of the Baltimore and Ohio railroad. There was no accompanying music or drum beats as the mourners quietly traveled to the depot.

The train depot was heavily guarded by a ring of soldiers and all approaches were blocked, with only authorized personnel permitted to enter. The waiting funeral train consisted of nine cars, all to be pulled buy a brand-new locomotive (steam-powered, of course). Also new were all the cars, each draped in heavy black mourning. The most elaborate car was of course reserved for Lincoln’s remains. Pictured above, the car had been built a short time before in Alexandria, Virginia at the U.S. Military Railroad car shops. Designed for Lincoln’s use while president, there is no indication that he had ever seen it, let alone use it. The car would forever be known from this point forward as The Lincoln Funeral Car as it transported the fallen leader to Springfield. (Unfortunately, the Lincoln Funeral Car no longer exists. It was lost in a fire in 1911 and only fragments of it remain.)

The Funeral Car had three main sections: a state room; dining room; and parlor. An aisle connected the dining room and parlor, but the state room (bedroom) was completely private. The outside of the car was brown with a carved eagle on each side (visible in the photo). By the standards of the day, the Funeral Car was extraordinary in its luxury. The woodwork was black walnut, tea sets were silver; and chandeliers dazzled. Now, the furniture was draped in black, the windows framed in mourning. Waiting Mr. Lincoln’s arrival was a small coffin, carrying the body of his son Willie, who died in 1862. He had been removed from the cemetery in Washington to accompany his father back home. Lincoln’s coffin was placed in the front of the car, with Willie’s at the opposite end.

Lincoln’s son Robert rode in the final car of the train, accompanied by Lincoln’s personal secretaries, John Hay and John Nicolay. Other dignitaries such as governors, pall-bearers, mayors, the Honor Guard, and friends road in other cars, some riding as far as Springfield, others departing along the way. In all, about 250 people were on the train that morning.

At 8:00 a.m., the funeral train sounded its muffled bell and pulled away from the depot as the long and mournful journey back to Springfield began. Soldiers stood at attention and saluted as the train slowly departed.

The Arrival In Baltimore
Lincoln’s Funeral Train arrived in Baltimore, Md. a short while later. The city which was so hostile to Abraham Lincoln barely four years earlier that he had to sneak through it on his way to his inaugural now welcomed the president’s remains with open arms. Schools and businesses were closed as huge crowds swarmed the funeral route. A huge and impressive catafalque pulled by four matched horses awaited the coffin. As in Washington, soldiers were everywhere at attention. Gun salutes sounded throughout the city. When the train arrived, Lincoln’s coffin was removed from the Funeral Car and placed on the catafalque. A solemn procession snaked through the city, ending at the Mercantile Exchange, where Lincoln’s remains would be on display for a short time. Hymns were sung, bands played dirges, and prayers were offered.
The tight schedule for the Funeral Train allocated just four hours for Baltimore to pay its respects to Abraham Lincoln. After only 90 minutes, the doors were closed at the Exchange and Lincoln’s coffin was removed and transported back to the train in order to meet the departure schedule. Thousands of mournful people lined the tracks while the train left for the next destination of Harrisburg, Pennsylvania.
In Baltimore, the many people who had not had a chance to file into the Mercantile Exchange to pay their respects to Lincoln asked for the building to be re-open. City leaders finally agreed, and mourners continued to file into the building to view the black funeral decorations, the flowers, and soldiers. Lincoln, though, was missing, which did not seem to bother the many who at least got to view the setting where he had been honored.
The description of the Funeral Train’s arrival in Harrisburg, Pennsylvania and associated funeral will be the subject of the next post as the series to commemorate Abraham Lincoln continues.