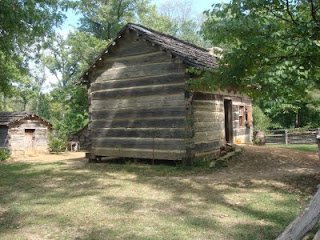 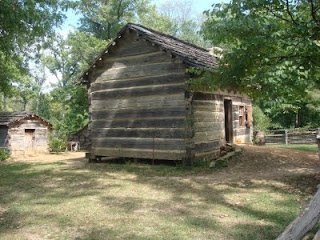 I hope the readers of The Abraham Lincoln Blog will forgive me another post about The Lincoln Boyhood National Memorial. There’s simply too much to cover about the park in only one or two postings. I visited the park for the first time in September and have enjoyed sharing my visit with my readers. I’ve previously written about the history of the park itself, about Lincoln’s mother, Nancy Hanks Lincoln, and about the Memorial Building. This post will conclude my descriptions of the Boyhood Memorial.
Pictured above is a replica log cabin intended to give park visitors an idea of what the real Lincoln cabin was like while Abe and his family lived here from 1816-1830. The National Service Park ranger who was portraying a pioneer woman that day told me that the true cabin was just 3 square feet larger than the replica. I don’t know the dimensions, but it must have been very cramped with Thomas and Nancy Lincoln plus two children living in it. And when Thomas married Sarah Bush Johnston, she brought her own three children to live with the remaining three Lincolns. The replica cabin is part of the “Living Historical Farm” which shows how the family farmed, raising crops and livestock. It occupies four of the original 160 acres of the Lincoln farm. A short trail leads the visitor to the original spring on the farm, which I’ve pictured below. Obviously, it’s not much too look at. Since it’s closed off, I don’t know if the spring is still flowing. 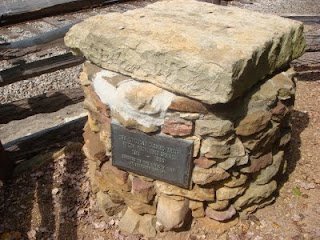 Located just a short distance from the replica cabin and farm is the preserved location of a cabin which the family began constructing in 1829. Archaeological excavations revealed the location in 1917. The dig found some hearth stones and the original sandstone foundation of the cabin. Obviously, the logs have disappeared long ago. Today the cabin site is marked by bronze replica logs and a hearth. This is pictured below. As you can see, the site of the cabin is blocked by the stone wall so visitors don’t destroy what’s left. 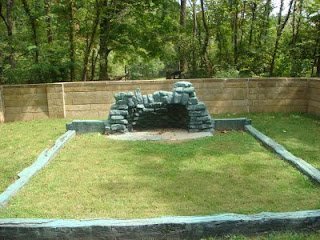 Finally, there is the Trail Of Twelve Stones, a 1/2 mile path through the woods which displays stones taken from sites which are closely related to Abraham Lincoln. It’s more interesting than one would think. Each stone is marked with a plaque, explaining where it came from and why it’s associated with Lincoln. They are spaced evenly along the trail through the woods in order to hold the visitor’s interest. The first stone you come to was taken from Sinking Spring farm in Hodgenville, Kentucky, Lincoln’s birthplace. Others are from the foundation of a store where Lincoln worked in the area; a newspaper building where he visited; from the home of Mary Todd in Lexington, Kentucky; from The White House; from Gettysburg; from the U.S. Capitol building; and from the Peterson House in Washington, D.C. where Lincoln died. The rock and plaque pictured below tell part of Lincoln’s story. 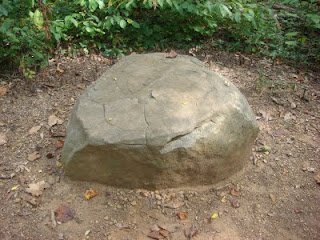 I hope my series of posts about The Lincoln Boyhood Memorial has given the reader a good understanding of both the park itself and of Lincoln’s 14 years he spent living in this part of Indiana. It was my first visit here and I enjoyed it very much. I liked it far more than I do the Lincoln Birthplace Memorial, and in some ways, I enjoyed it as much as I do Springfield. To be sure, it’s a low-key place. You can’t visit an original home he lived in here, he wasn’t born here, he’s not entombed here. Yet, there’s a simplicity about the park which appealed to me greatly. The forests and land which make up the park still appear much as they did nearly 200 years ago when Lincoln grew up in the area. The museum in the Memorial Building, while small, is blessedly free of the “Disney-like” displays in the Abraham Lincoln Presidential Library and Museum in Springfield. It tells his story without sound effects, cheesy statues, and other flashy attractions, which to me are a huge distraction from the history of the real man.
In fact, while I was in the visitor center of the Memorial Building, there was a group of Cub Scouts visiting that day. Each boy, probably no older than 10, was enthusiastic and excited about his visit. They were clamoring to learn about Abraham Lincoln and how they could get their “Junior Ranger” certification from the National Park Service. Their attention was held without high-tech displays or computers or other special effects. That’s a good thing, in my opinion. And I write this even though my career is in Information Technology with my degree in Computer Science. Yes, I’m “only” an amateur historian.
If you ever have a chance to visit The Lincoln Boyhood National Memorial in Lincoln City, Indiana, take the opportunity to do so. I can’t recommend it highly enough.