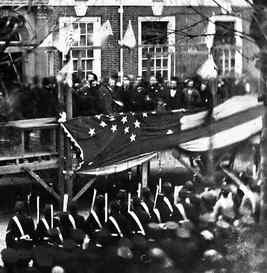 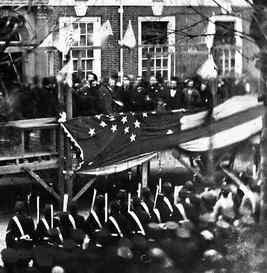 The city of Philadelphia, Pennsylvania is getting ready to celebrate Lincoln’s 200th birthday this Independence Day weekend, July 2 through 5, 2009. Lincoln 200 just might be the biggest of all the celebrations for our nation’s 16th president this year. There will be parades, concerts, exhibits, art work, living history, and other events all weekend throughout the city. The link is to the official website with a complete schedule of events.

Why Philadelphia? Lincoln felt a deep passion for the history of our country and of course no other city in the United States means as much in our history as Philadelphia. It was the scene of the creation and signing of both the Declaration of Independence and the U.S. Constitution. It was also the nation’s capital from 1790 to 1800 while Washington, D.C. was being constructed.

Lincoln stopped in Philadelphia in 1861 during his journey to Washington for his first inauguration. On February 22, 1861 (George Washington’s birthday), Lincoln gave a speech at Independence Hall. In that speech, Lincoln stated that “I have never had a feeling politically that did not spring from the sentiments embodied in the Declaration of Independence.” (This is why he dated the founding of our country back to 1776 instead of 1787 when the Constitution was put into effect). In that same speech, Lincoln also referred to the dangers that our nation’s founders faced by declaring independence from England. He spoke of the equality of all men declared in the Declaration. Finally, he told his listeners that “If this country cannot be saved without giving up that principle – I was about to say I would rather be assassinated on this spot than to surrender it…. I have said nothing but what I am willing to live by, and, in the pleasure of Almighty God, die by.” The photo in this post shows Lincoln that day at Independence Hall.

Philadelphia also hosted the body of Abraham Lincoln on April 22, 1865. Lincoln’s remains were shown in state at Independence Hall, where just a little more than four years before, he gave his eloquent and moving speech.

Yes, Lincoln’s ties to Philadelphia are strong. The festival sounds like it will be very interesting. Go celebrate Mr. Lincoln’s legacy!