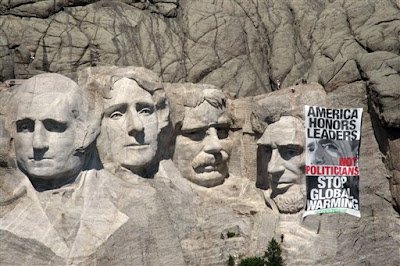 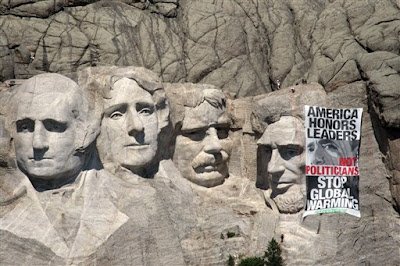 By now it’s fairly old news that the environmentalist group Greenpeace staged a protest yesterday about global warming at Mount Rushmore, South Dakota. Members of the organization used rappelling anchors (already in place for the National Park Service to use when cleaning the sculptures) and unfurled a banner which read “America Honors Leaders, Not Politicians. Stop Global Warming.”

I have mixed emotions about the protest that Greenpeace staged yesterday. Certainly, the members of the group broke the law by trespassing on National Park Service (NPS) land. They could have damaged the carvings. Most seriously of all, they endangered their lives and the lives of the NPS rangers who escorted them back to safety. And of course since I blog about Abraham Lincoln, I was at first angry that Greenpeace protested next to Mr. Lincoln’s “head.”

On the other hand, I care deeply about the environment and I practice environmentalism on an personal basis. I currently own a 2009 Toyota Prius, which is the third Prius I’ve owned since 2001. My wife and I recycle virtually everything we use. I believe global warming is real, although the causes of it are debatable. Looking at Greenpeace’s banner in another way, it could be taken to mean that this country is in desperate need of leadership, the kind which Washington, Jefferson, Theodore Roosevelt, and yes, Abraham Lincoln provided to our nation. In fact, I rather think these four men, especially Roosevelt (who championed conservation), would take action to help combat the effects of global warming.

The New York Daily News had a laughable headline it its edition today, claiming that Greenpeace “defaced” the face of Lincoln at the mountain. Well, no. It unfurled a temporary banner. It did not deface Lincoln’s carving or any of the others. And looking at it from the viewpoint of the Native Americans, this mountain (which is spiritual to them) was defaced when Gutzon Borglum, the carver, created these faces in the 1920s. The NPS website states that Mount Rushmore was created to honor American History. True from one point of view. But it does not honor Native American history.

In the end, the Greenpeace protesters were arrested yesterday and face heavy fines and possible jail sentences. That is as it should be, because they did break the law. At the same time, they brought attention to an important issue. Above all, they demanded leadership from our president and the rest of the politicians. And that is not a bad thing.