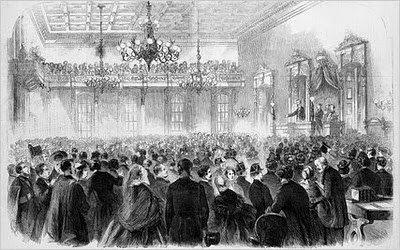 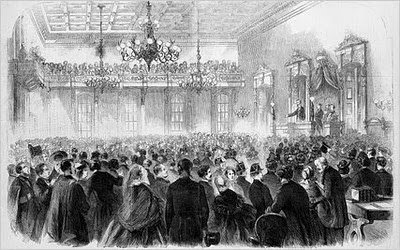 Abraham Lincoln arrived in the state capital of Ohio, Columbus, on February 13, 1861 during his Inaugural Journey to Washington. More accurately, it could be said that he barely arrived in the capital city.

According to the New York Times report of the date, a bomb was found on Lincoln’s train car earlier that day as it left Cincinnati, where he had spoken the day before to tens of thousands. Fortunately, the bomb was either defused or disposed of and Lincoln, his family, and the rest of the passengers made it safely to Columbus. Lincoln was already under death threats and now an attempt on his life had already been made.

The Buckeye State (my home state) went wild for Abraham Lincoln. In Xenia, Ohio earlier in the day, a mob estimated at 5,000 people was waiting for Lincoln’s arrival at the depot. The crowd jumped on the roof of his train car, stormed the depot, and even ate the President-Elect’s lunch which had been waiting for him. Though they demanded a speech, Lincoln gave them none, generally fearing for his and his family’s safety in such a tumult.

Lincoln spoke very briefly at another whistle stop along the way to Columbus, in the small village of London, Ohio while the train took on fresh water. Lincoln declined to give a speech and instead asked an assembled band to play a musical interlude. He was already tired and hoarse from speaking and he was only three days into his journey.

A huge sea of people awaited Lincoln in Columbus, then a town of not even 20,000. Yet the Times estimated that at least 50,000 people were in the town in order to glimpse the future president.

Lincoln was taken by carriage to the Ohio Statehouse where the combined houses of the state’s legislature (called “General Assembly”) waited to hear him speak. From the print showed above (courtesy Library of Congress), the building was jammed with people. Abraham Lincoln spoke to the Assembly, but the speech was unmemorable and included a strange statement when he claimed that “nothing was going wrong” in the country and that “there is nothing that really hurts anybody.” Even close friends were disappointed by his speech in Columbus and for that matter, in Cincinnati and Indianapolis as well.

(Abraham Lincoln was not a good extemporaneous or “off-the-cuff” speaker and these speeches thus far had revealed that weakness of his. The speeches which have come through the ages to us as brilliant and moving were those which he worked on carefully for weeks, constantly editing and marking them until he felt they were just right. This more than anything puts to bed the myth that Lincoln wrote his Gettysburg Address on the back of an envelope while traveling to Gettysburg.)

Once the speech was over that day in Columbus, Lincoln had to escape to another room to avoid the crush of people who rushed toward him, determined to touch the man who would soon be President.

Lincoln then went to the outside steps of the Ohio Statehouse in order to speak to the thousands who were not politicians or VIP’s and who had missed hearing him in the building. Lincoln acknowledged that not everyone in the crowd had voted for him, but that he appreciated their attendance, saying that had any of his opponents had won, he would think that such a crowd would have come to see the other men, too. He also admitted that the State General Assembly had just heard a few “broken” remarks from him, so it’s quite possible that Lincoln realized that his speech had not been a good one.

While in Columbus, Lincoln was notified by telegram that with the presidential vote officially counted in Washington that day, he was now certified to be the next President Of The United States. There is an interesting account from yesterday’s (February 12, 2011) New York Times about this vote. Someone asked General Winfield Scott on February 13, 1861 what would happen should someone try to disrupt the official vote counting in Washington that day, especially if it was a U.S. Senator from a southern state. The person was unbelieving that Scott would have him arrested. Scott replied: “I would blow him to hell!”

Lincoln spent the night in Columbus, Ohio 150 years ago today, February 13, 1861. He resumed the Inauguration Journey, the next day as he traveled through small villages and towns in eastern Ohio, on his way to Pittsburgh, Pennsylvania. That leg will be described in my next post. Stay tuned.