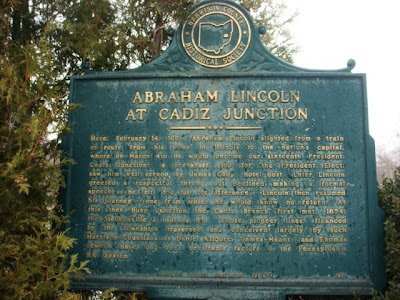 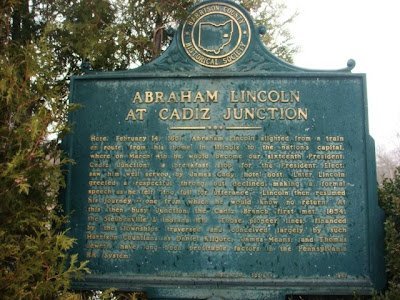 150 years ago today on February 14, 1861, Abraham Lincoln stopped for a meal at the tiny village of Cadiz Junction, Ohio during his Inauguration Journey from Springfield to Washington.

This meal stop for Lincoln, his family, and the rest of the party certainly wasn’t an important event in Lincoln’s legacy, nor was it noteworthy in his Inauguration Journey, except to the local people. Nonetheless, I want to make sure the anniversary of this small event was not overlooked.

Lincoln and his family ate at a local boarding house or hotel which is long gone. While the local papers of the day claim he had dinner there, this marker claims he had breakfast there. I would tend to believe the papers. Mr. Lincoln didn’t give a speech or much talk to the crowd waiting for him, claiming he was “too full for utterance” after the meal. But he did thank the people of Harrison County for their hospitality.

Cadiz Junction is located in the rugged foothills of the Appalachian Mountains in rural southeastern Ohio. It’s located in Harrison County, just a few miles outside the county seat of Cadiz. Cadiz Junction was at the intersection or “junction” between the Pittsburgh, Cincinnati, and St. Louis Railroad (later the Pennsylvania Railroad system) and a branch line which ran from Cadiz to Cadiz Junction. It was important enough of a stop that General George A. Custer, General Ulysses S. Grant, Lincoln’s successor President Andrew Johnson, and Admiral David Farragut also stopped on various train trips for a meal at the local hotel.

Today the hamlet of Cadiz Junction has all but vanished. While trains certainly still pass through, the best times for the settlement have been over for at least a century. Today there is a house, an abandoned railroad “house” (similar to a depot, probably where workers could spend the night), and a small township garage. That, plus the historical marker I’ve shown above. The photos I’ve included below are how this hamlet appears today: 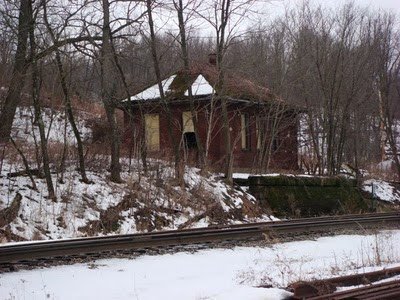 The image at the beginning of this post is a photograph I took earlier today of the historical marker commemorating Lincoln’s visit. The marker was placed there many years ago not by the Federal Government, not by the state of Ohio, but simply by the Harrison County Historical Society.

There are no signs on the main Ohio state route leading to the township road where Cadiz Junction is located. There are certainly no signs telling people about this historical marker, and many county residents probably don’t even know it’s there. I only know about it because both sides of my family hail from this rural Ohio county. It was one of the first sites associated with Abraham Lincoln I ever visited as a young boy.

I chose to commemorate Lincoln’s visit to this remote area of Ohio because I didn’t want it to be overlooked in the hoopla associated with the sesquicentennial of Lincoln’s Inaugural Journey. Re-enactments are happening in major cities across the original route, including this past Saturday in Cincinnati, Ohio and yesterday in the state capital of Columbus.

I’ve purposely avoided the National Park Service ceremonies and re-creations of Lincoln’s Inauguration Journey. There have been thousands of people attending them already. I have no desire to see even a fantastic Lincoln portrayer give portions of the speeches Lincoln gave in the various major cities.

Instead, I chose to travel to Cadiz Junction. I wanted to spend some time quietly reflecting on Lincoln’s legacy as I tried to imagine what the scene might have looked like when he visited, the weight of the nation riding on his shoulders.

There were no ceremonies today in Cadiz Junction to commemorate Mr. Lincoln’s visit. No speakers, no speeches, not even a write-up about his visit in the local weekly paper. It’s a pity.

Even so, at least one person was there, remembering the day when 150 years ago, February 14, 1861, Mr. Lincoln and his family paid a visit.