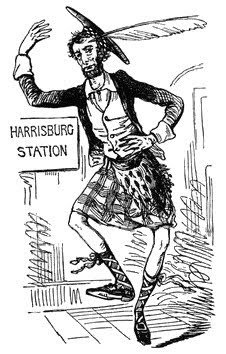 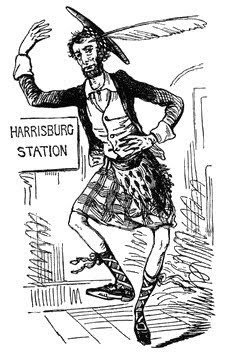 Abraham Lincoln’s Inauguration Journey ended 150 years ago today, February 23, 1861 with his arrival in Washington City. He and his family, along with other associates, had been traveling since February 11, when they departed Springfield, Illinois. They rode through seven states, visited the state capitals of six of them, and stopped countless times along the way at large cities and places which barely qualified as crossroads. Some estimates say that Lincoln spoke to approximately 1 million people over the 1900 miles of the journey. Records show that he gave at least 75 speeches, but he no doubt gave more of which we have no evidence.

The Inauguration Journey which had been so successful in letting the people see their President-Elect should have ended triumphantly that day in Washington in front of adoring crowds. Instead it came to an inglorious end with Abraham Lincoln, while in disguise, being sneaked into the city before dawn broke, with only one person present to greet him.

The drama which led to Lincoln’s stealthy entry began while Mr. Lincoln was still in Philadelphia. It was there where private detective Allan Pinkerton, who ran a famous detective agency (still in existence today) out of Chicago, informed those close to the President-Elect that his operatives had uncovered a plot against Lincoln. According to the reports of the agents, Lincoln would be attacked (probably stabbed) as he transferred between railroad stations in Baltimore, Maryland.

Maryland was a slave state, with strong secessionist leanings, more southern than northern in its outlook concerning the sectional crisis. Baltimore was the hotbed of those sympathies and the city was hostile towards northerners at that point. It mostly would have been problematic to get Lincoln and his family safely through the city to begin with, but now this “plot” that Pinkerton was reporting further complicated the situation.

It wasn’t only Allan Pinkerton’s detectives who reported a conspiracy against Mr. Lincoln. In fact, the superintendent of the New York Metropolitan Police, Mr. John A. Kennedy, had himself gone to Baltimore along with the city police chief, to investigate what they also felt was a plot against the President-Elect. The city’s best detectives joined them in going to Baltimore.

At first, Lincoln’s advisers were split about what should be done. But ultimately, it was decided that Lincoln should be sneaked through Baltimore so safe passage to Washington could be guaranteed. Lincoln himself was convinced by Pinkerton that the plot was real.

Lincoln continued with his itinerary in Pennsylvania, though. He spoke in Philadelphia at Independence Hall, then traveled for his address to the state legislature in Harrisburg. The public had been informed that Lincoln would then travel to Baltimore and finally to Washington.

Instead, Lincoln was secretly put onto another train car in Harrisburg and traveled back to Philadelphia on the night of February 22, 1861. Lincoln wore a type of overcoat (similar to a Navy pea coat), a soft felt cap, and a shawl he could put around his face if necessary. Lincoln’s friend Ward Hill Lamon was with him, as was a female detective from the Pinkerton agency. Mary and the children remained overnight in Harrisburg while Lincoln was under protection. They would travel to Washington via Baltimore the next day on the Presidential Special which Lincoln was to have taken.

Other precautions were taken as well. Telegraph wires in and around Harrisburg were cut, thus isolating the city from the rest of the country. Lincoln had boarded the train there under an assumed name, with the female agent posing as his sister.

They arrived in Philadelphia the night of February 22, 1861 at around 10:00 p.m. where the party boarded the overnight train to Baltimore, Lincoln registering under an assumed name. The female agent shared the sleeping car with Lincoln, and slept near him in another bunk. If Mary Todd Lincoln knew about this, she must have exploded in rage as she was insanely jealous if another woman so much as looked at her husband.

The train finally came to Washington City at around 6:00 a.m. the next day, February 23. The only person present to greet Lincoln was his old friend, Congressman Elihu Washburne of Illinois. Washburne had seen right through Lincoln’s disguise and said “Abe, you can’t fool me!” The bodyguards, not recognizing Washburne, nearly attacked him on the spot, until Lincoln stopped the men.

Lincoln was safely arrived in the nation’s capital without incident. But once the news got out about his stealthy trip to the city, the newspapers had a field day with their criticisms and lampooning of Lincoln. He was called “cowardly,” “undignified,” and much worse. Editorial cartoons were published in newspapers across the country (one of which, from Vanity Fair is shown at the beginning of this post), showing him sneaking around in exaggerated attire. His overcoat, shawl, and hat quickly became a “Scottish cap” and “kilt” according to some papers, and people even today believe that Lincoln wore a dress to pose as a woman.

Such was the ridicule from the newspapers that Lincoln himself regretted allowing himself to be hidden in disguise and sneaked into the nation’s capital. Some historians claim that it affected his outlook on his personal safety throughout his presidency, leading him to refuse more than minimal security. However, it must be understood that death threats had come to Lincoln while he was still in Springfield. Even then, he seemed to take a cavalier approach to his own safety.

Historians today debate just how real the “Baltimore Plot” was. Harold Holzer, the nation’s leading Lincoln scholar, believes that the plot, even if it did exist, was “ad hoc” at best. Other historians seem to believe it was authentic and that Lincoln would have been in true danger.

However, Lincoln himself chose to believe the plot was real. It must be remembered as well that Dayton, Ohio had been purposely avoided early in the Inauguration Journey due to a large population of “Copperhead Democrats” (Northern Democrats who supported Southern principles), thus avoiding potential dangers.

Above all, Lincoln’s personal secretary and his self-appointed bodyguard and friend Ward Lamon, insisted that getting Abraham Lincoln safely to Washington City was of the greatest importance. And it is unquestionable that they were correct. To help resolve the national crisis, Abraham Lincoln had to survive to become President Of The United States.