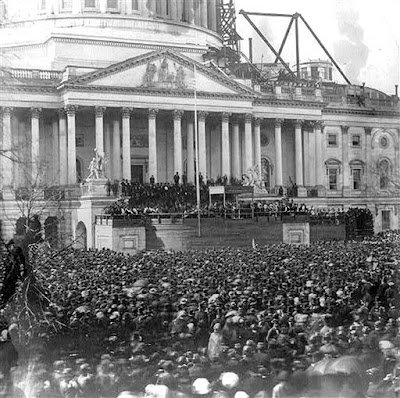 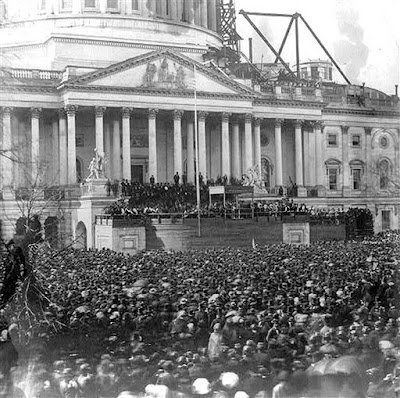 The people began arriving at the U.S. Capitol grounds in Washington City before dawn on March 4, 1861, 150 years ago today. They gathered in front of the East Portico of the Capitol, where in only a few hours, Abraham Lincoln would at long last be sworn in as the 16th President Of The United States Of America. The image above was taken 150 years ago today during Lincoln’s First Inauguration ceremony.

In those days (and until 1933 when the 20th Amendment to the U.S. Constitution was ratified), presidential inaugurations were held on March 4th. It had been nearly four months since Lincoln had won the 1860 presidential election over three other opponents, garnering only 39% of the popular vote. Since his election, seven southern states had seceded from the Union.

Lincoln had remained publicly silent about the secession crisis while he was President-Elect. Even during his Inauguration Journey when he gave over 100 speeches over the course of 13 days from Springfield to Washington, he had said barely anything of substance about the turmoil rocking the nation. He had claimed that the crisis was “artificial” and that the south had nothing to really “complain” about, but he had not given many hints about what his policies would be toward the rebellious states. As winter turned into spring, Lincoln’s long public silence was about to end. The crowd, estimated at 30,000, waited along with the nation, north and south, to hear Mr. Lincoln’s Inaugural Address.

The crafting of the Address had begun back in Springfield, where Lincoln had been working on it since his election. An initial version of it had been set in type by the Springfield newspaper Illinois State Journal at Lincoln’s request. Lincoln shared this first draft with various friends and leaders, seeking their opinion as to how it should read. Upon his arrival in Washington, Lincoln asked his designated Secretary of State, William H. Seward (his main rival for the GOP nomination the year before in Chicago), for his own inputs. As Lincoln scholars such as Harold Holzer have pointed out, the speech which had been strong in tone in Lincoln’s first draft, became progressively more conciliatory to the southern states as others suggested corrections.

Outgoing president James Buchanan accompanied Lincoln on the ride from The Willard Hotel (where the Lincoln family had been staying since its arrival in Washington on February 23rd), riding in an open carriage. They were surrounded by soldiers on horseback, who would hopefully keep Mr. Lincoln alive long enough to take the oath of office. There were numerous death threats already against Lincoln, including some which had arrived in Washington City just days before. Supposedly during the carriage ride, President Buchanan said something along the lines to Lincoln “If you are as happy entering office as I am to leave it, then you are the happiest man in the world.” Buchanan’s presidency had been an abject failure as he sat and did nothing as the nation tore itself apart.

Lincoln might have been personally gratified at winning the election, but one cannot imagine that he was “happy” to be entering office during this national crisis. In fact, he was rather apprehensive about it, having been up before dawn that day. Along his recent Inauguration Journey, he had admitted many times that he felt a greater burden upon becoming president than any of his predecessors, including the burden which faced Washington to help establish a new nation. Lincoln’s burden, of course, was to try to save that nation.

The usual dignitaries were waiting Lincoln’s arrival at the Capitol. On the platform near to him were Senators and Congressmen, other high ranking government officials, and the Chief Justice Of The United States, Roger Taney. Seated very close to Lincoln was Stephen A. Douglas, the northern Democrat Lincoln had defeated four months before. As Lincoln rose to speak, he looked for a place to rest his hat. When he could find none, Douglas graciously took the hat from Lincoln and held it for him, saying that if he couldn’t be President, he could as least hold the President’s hat.

Security was extraordinarily tight as Lincoln was on the platform waiting to speak. Sharpshooters had been stationed on the top of the Capitol and every soldier who could be spared in Washington had been. Police ringed the grounds of the Capitol, eyes constantly scanning the crowd. The U.S. Secret Service was not yet in existence this day and everyone feared Lincoln would be killed before he became President. Fortunately on that day, at least, Mr. Lincoln would survive.

Lincoln opened his Address with pleasantries to those gathered before him, then immediately began discussing the national crisis. He began by quoting himself from a former speech, again stating that “I have no purpose, directly or indirectly, to interfere with the institution of slavery in the States where it exists. I believe I have no lawful right to do so, and I have no inclination to do so.” He stated that his stance had not changed.

The Fugitive Slave Law, by which escaped slaves were required to be returned to their owners was also addressed by Lincoln. He stated that he and the Congress would continue to enforce that law; fugitive slaves would continue to be returned to their masters. He told the crowd, but really speaking to the Southerners, that it was the law of the land. This section of Lincoln’s First Inaugural Address is perhaps the most surprising to modern eyes when people first read it.

Lincoln went on to address the concept of secession. He said “I hold that in contemplation of universal law and of the Constitution the Union of these States is perpetual. Perpetuity is implied, if not expressed, in the fundamental law of all national governments.” In Lincoln’s view, the Union which had been entered into by all of the states could not be destroyed by only some or one of those states.

After a few more paragraphs, Lincoln next addressed the issue of potential war. Lincoln said that there would be no violence against the rebellious states, unless it was “forced upon the national authority.” He said clearly that under his administration, the Federal government would “hold, occupy, and possess” its property and places and would continue to collect the duties. But at the same time, he said that there would be no “invasion” beyond this pledge to hold onto property.

Then Lincoln got to what was really at the heart of the national crisis, (contrary to claims of neo-Confederates and the Sons Of The Confederacy): the extension of slavery. Lincoln stated: “One section of our country believes slavery is right and ought to be extended, while the other believes it is wrong and ought not to be extended. This is the only substantial dispute.” Lincoln explained how in his opinion, how disunion would weaken the Fugitive Slave Law and would revive the then-abolished foreign slave trade.

A few more paragraphs of the Address consisted of Lincoln encouraging patience of the people, explaining how the people gave the duties to the President, and even pledging to support the notion of a new amendment to the Constitution, protecting slavery for all time where it already existed. Another surprise for people who think Lincoln tried to eradicate slavery at the beginning.

Lincoln then moved to his closing statements. He told the South that “In your hands, my dissatisfied fellow-countrymen, and not in mine, is the momentous issue of civil war. The Government will not assail you. You can have no conflict without being yourselves the aggressors. You have no oath registered in heaven to destroy the Government, while I shall have the most solemn one to “preserve, protect, and defend it.”

Finally came some of the most beautiful writing Abraham Lincoln ever committed to paper, his closing paragraph. The idea and suggested phrasing had come from William H. Seward, his designated Secretary of State. But Lincoln recast Seward’s stilted language into the famous words: “I am loath to close. We are not enemies, but friends. We must not be enemies. Though passion may have strained it must not break our bonds of affection. The mystic chords of memory, stretching from every battlefield and patriot grave to every living heart and hearthstone all over this broad land, will yet swell the chorus of the Union, when again touched, as surely they will be, by the better angels of our nature.” The image below is of this closing paragraph in Lincoln’s handwriting: 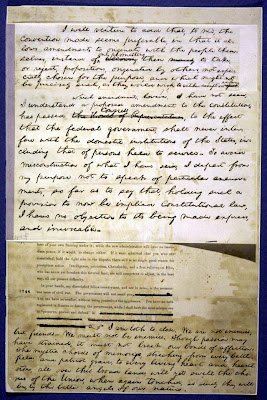 (If you have never read the complete text of Abraham Lincoln’s First Inaugural Address, you may find it here. It’s worthwhile to take a few minutes to do so.)

With Lincoln’s First Inaugural Address completed, Chief Justice Taney arose to give the oath of office to Abraham Lincoln. It was one of the most ironic moments in U.S. history, for Justice Taney and his fellow justices had ruled in the 1857 Dred Scott decision that slaves had no rights as persons, and weren’t even persons in the eyes of the law. Further, his court also ruled that Congress had no jurisdiction under the Constitution to interfere with slavery anywhere in the U.S. or its territories. It was, of course, a decision which helped to further tear the nation apart.

The Bible used that day by Abraham Lincoln to pledge to defend and protect the U.S. Constitution was not the Lincoln family Bible. That was still in the Lincolns’ possessions which had yet to arrive from Springfield. Instead, a Bible from the Supreme Court was provided. After the ceremony that day, the Clerk of the Supreme Court wrote in the back about what it had been used for and later sealed it. It is the same Bible which President Obama used two years ago at his own inauguration. Below is an image of the Bible, which is held by the Library of Congress. 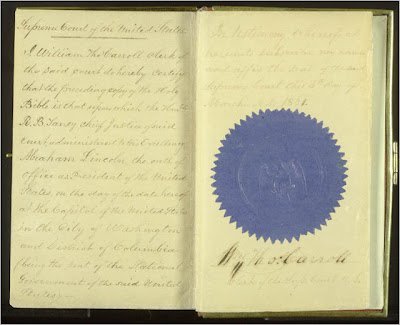 After completing the oath of office, Abraham Lincoln surprised many in the crowd by bending to kiss the Bible. He was not known to be particularly religious and had never before joined a church. The crowd erupted into a roar after Lincoln turned to face the crowd as the newly created 16th President Of The United States.

It was a brilliantly sunny day in Washington City 150 years ago today. But there were ominous clouds far off on the horizon, bringing with them the threat of Civil War.