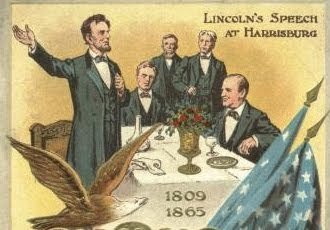 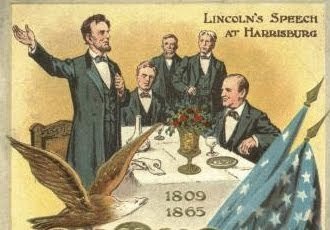 Abraham Lincoln was finished with his visit to Philadelphia. Earlier that morning on February 22, 1861, he had given by far his most dramatic (and best) speech of his Inauguration Journey, when he claimed he would rather be assassinated than save the country by giving up the principles of the Declaration Of Independence.

Now it was time to travel on the next leg of the trip to Washington. The next major stop was the Pennsylvania state capital of Harrisburg, where he would address the legislature and governor. Smaller towns and cities were briefly visited as well along the way. In Leaman Place, Pennsylvania, Lincoln for once brought his wife Mary out to appear before the crowd. Lincoln made one of his jokes, and told the crowd he was giving them the “long and short” of his visit. At 6’4″, Lincoln towered over Mary, who was much shorter at just 5’3″ or so. At Lancaster, Pennsylvania, Lincoln resorted to his simple speech of thanking the crowd for showing up, saying he had no time for a lengthier address, and bade the crowd farewell. Lancaster was the home town of the current President, James Buchanan, who was of course in Washington.

Lincoln and his family arrived in the early afternoon at the Harrisburg train station. Awaiting Lincoln was a grand display of the state militia, and the Governor, Andrew Curtin. A grand procession took Lincoln and his family to the Jones House, one of the stylish hotels of the city. After settling in for a bit, Lincoln appeared on the balcony with the Governor, who introduced him. The President-Elect once again told a crowd that he felt he had the gravest task and responsibility before him than any other president before him, except Washington. He praised the appearance of the militia, but hoped strongly that no blood would be shed by them, especially fraternal blood (i.e. civil war). He again said that it was his goal to preserve the peace of the country if he could do so without giving up the “institutions” and principles of the nation.

The next appearance in Harrisburg was to be the capitol building where he addressed the Pennsylvania General Assembly. In that speech, he related how honored and moved he had been earlier that morning to speak at Independence Hall. He also shared that he had raised the new American flag and that he hoped it would be an omen of good things to come. He also reiterated his admiration for the state militia and re-emphasized that he hoped that there would be no need for bloodshed in the nation. The image of the postcard above is an artist’s idea of how Lincoln might have appeared as he addressed the Assembly.

After listening to a fairly lengthy oration about General Washington (this was, after all, Washington’s birthday) in the statehouse, Lincoln returned to the Jones House hotel, where he was going to retire at around 8:00 p.m.

That was the official story. In reality, new travel plans had been made for the President-Elect, thanks to the discovery of a plot to assassinate him as he changed cars in Baltimore.

More on the attempt to get Abraham Lincoln safely to Washington City in my next post.