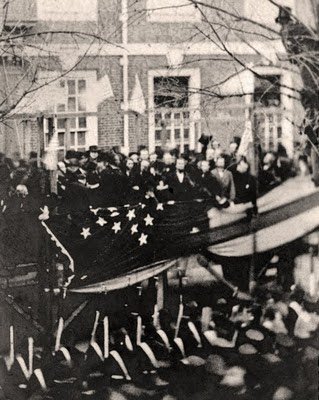 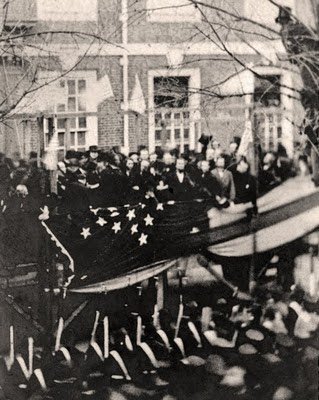 By February 22, 1861, Abraham Lincoln and his family had been traveling for twelve long days on the Inauguration Journey to Washington City, as the nation’s capital was called in those days. Hundreds of thousands of people had ventured into the cold to see the President-Elect along the route, even if it was for a minute or two during a quick watering stop, where he would have time only to greet the crowds, and then just as quickly say farewell. Others who were luckier would hear Mr. Lincoln give longer speeches, but those speeches contained nothing of real substance. Lincoln was still keeping his deepest thoughts and emotions about the national crisis close to his vest.

That would change 150 years ago today in Philadelphia, when he spoke in the “sacred” building called Independence Hall, where both the Declaration of Independence and the U.S. Constitution were written. Lincoln had been invited to speak there on that day, George Washington’s birthday, and to also help raise a giant American flag featuring the nation’s newest star, the one for Kansas, the 34th state which had been admitted on January 29th of that year.

Lincoln arrived at Independence Hall early that morning, which was cold, but sunny. Lincoln was welcomed by the president of the Select Council Of Philadelphia, then began his speech. It would be the most moving speech of his Inauguration Journey.

He opened with the words “I am filled with deep emotion at finding myself standing here in the place where were collected together the wisdom, the patriotism, the devotion to principle, from which sprang the institutions under which we live.” These words were not mere platitudes from Lincoln. He had mentioned the previous day in Trenton, N.J., that he had often read Mason Weems‘ “Life Of Washington” biography. Lincoln had a deep knowledge and appreciation for the sacrifices that Washington, his soldiers, and the other Founding Fathers made in forging a new nation.

Lincoln continued: “I have never had a feeling politically that did not spring from the sentiments embodied in the Declaration of Independence. ” Huge cheers broke out inside the building at these words. For Abraham Lincoln, the United States of America did not begin with the U.S. Constitution, by which the structure of the government was determined; it began with the Declaration of Independence. This is why in his Gettysburg Address he would give more than 2 1/2 years later, he dated the beginning of this nation to “four score and seven years” before 1863, the year 1776.

He went on, saying that it wasn’t the mere separation of the colonies from Great Britain which had thus far sustained the nation, but “something in that Declaration giving liberty, not alone to the people of this country, but hope to the world for all future time. It was that which gave promise that in due time the weights should be lifted from the shoulders of all men, and that all should have an equal chance. This is the sentiment embodied in that Declaration of Independence. ” They were powerful words.

The group of men Lincoln was speaking to at that moment didn’t know that on the previous day, an assassination plot against Lincoln had been uncovered. The plot was confirmed by two different sources, the New York Chief Of Police, and informants working for Allan Pinkerton, a private detective. According to reports from each source, Lincoln was targeted for assassination in Baltimore, Maryland, as he would be switching train cars in that city for the final leg to Washington.

Given the fact that Lincoln was already a target of a conspiracy, the next words in his speech that morning to the VIP’s of Philadelphia hold even more meaning with the hindsight of history. Lincoln asked those assembled if the country could be saved on the principles of equality for all people. He said “If it can, I will consider myself one of the happiest men in the world if I can help to save it. If it can’t be saved upon that principle, it will be truly awful. But, if this country cannot be saved without giving up that principle…I would rather be assassinated on this spot than to surrender it.” Lincoln was willing to die to save his country and the freedom for which it stands.

Lincoln closed this speech by stating that there would be no blood shed, unless it “be forced upon the Government. The Government will not use force unless force is used against it.” He would repeat this message in his First Inaugural Address the following week.

After this speech (which Lincoln claimed was “unprepared”), Lincoln stepped outside to the platform for the flag raising ceremony. Before he assisted in raising the new 34-star flag, Lincoln briefly spoke to the crowd, saying that he hoped there would be many more stars to come to the flag. He also told those in the crowd that the future of the nation rested in their hands. With that, Lincoln hoisted the new American flag.

The image at the beginning of this post was taken 150 years ago today when Lincoln was on the platform at Independence Hall for the flag raising. Lincoln stands bareheaded directly over the third star from the left. His son Tad appears in the photo as well, resting his arms on the railing as he stares at the crowd. I’ve included a close-up of the photo below, with Lincoln outlined in red, and Tad outlined in yellow. The first photograph (along with two others taken at the same scene) are the only known photos in existence of Lincoln’s Inauguration Journey.