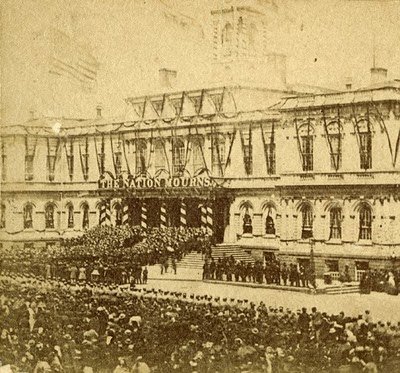 (Author’s Note: For the past twelve days, I’ve been publishing a series of posts marking the 145th anniversary of the assassination of Abraham Lincoln. His death on April 15, 1865 plunged the nation, already stricken by the horrors of a war which had cost 600,000 lives, into a new spasm of grief as it mourned the president. The national spectacle which followed as thirteen cities hosted funerals for Lincoln has never been repeated. New York City had its chance to pay its respects to Abraham Lincoln 145 years ago today, on April 25, 1865.)

Abraham Lincoln was no stranger to the city of New York. It was the scene of his dramatic “right makes might” speech at Cooper Union on February 27, 1860, a speech which Lincoln himself later said made him president. On his inaugural trip to Washington, D.C. as president-elect, Lincoln spent two more days in New York on February 19-20, 1861 as he addressed crowds about the developing secession crisis. New York newspaper editors, such as Horace Greeley (“Go West young man”) exerted their powerful influence on Lincoln during his presidency, especially when an editorial demanding the end of slavery resulted in a personal letter from the president. Now New York City would play host to the president’s remains on April 24 and 25, 1865 as it put on a display of mourning rivaled only by that of Washington, D.C.
The Lincoln Funeral Train had departed in the early morning hours on April 24 from Philadelphia on its way to the nation’s largest city, New York. The train entered New Jersey and pulled into the station at Trenton, the state capital, at dawn. City leaders and residents were a bit hurt because Trenton was the only state capital which was not honored with the opportunity to host a grand funeral service for the president. They had to make do with a brief 30 minute stop as people got as close as they could to get a glimpse of the coffin in the Funeral Car. There was a schedule to keep and New York was waiting.
The train arrived in Jersey City, New Jersey at around 10:00 a.m. where it was greeted by a large crowd. The depot’s large clock did not read the current time, but instead had been fixed to 7:22 a.m., the moment of Lincoln’s death nine days earlier. There on the shore of the Hudson River, Lincoln’s casket was placed onto a small hearse and transported across to New York. Following in a second ferry was the Funeral Car itself, still containing the coffin of Willie. Ships in the river at the time tolled their bells as their crews lined at attention.
The ferry arrived on the New York shore to be met by that state’s famed Seventh Regiment, which had been among the first troops to arrive in the nation’s capital for the defense of Washington. Now they were to escort their fallen commander-in-chief’s remains to City Hall, where he would lay in state.
New York’s City Hall was covered in black mourning while flags flew at half-mast. Over the entrance to the building, the words “THE NATION MOURNS” appeared in giant white letters placed on a backdrop of black. The image below shows how the building appeared that day, April 24, 1865, just after Lincoln’s body had been taken inside to be placed in the rotunda. 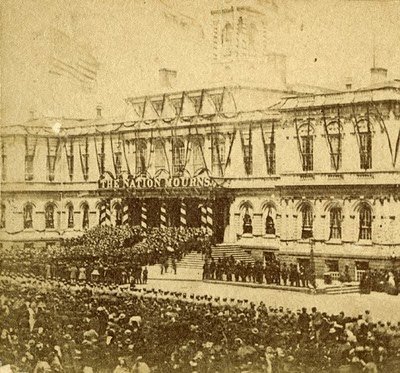 It was in the rotunda of New York City Hall where the only known photo of Abraham Lincoln in death was taken. The photo, which is shown at the beginning of this post, shows Lincoln in the casket, while an admiral and general pose at opposite ends. It was taken by a New York photographer, who stood in a high section of the balcony at the opposite end of the rotunda. When Secretary of War Edwin Stanton heard that such a photo had been taken, he was furious and ordered all the plates of it destroyed. Pleas from New York to preserve the scene for posterity went unheeded and eventually the plates were destroyed. However, a single print was sent to the Secretary to show him how dignified the photo was. Stanton fortunately kept the print in his papers, where it was discovered by his son twenty-two years later. Ultimately, the print found its way to the Illinois State Historical Library, where a young Lincoln enthusiast discovered the photo in 1952.

Lincoln’s remains were displayed at New York City Hall for the remainder of the day and night on April 24. The coffin was placed at an angle, so people approaching on the staircase leading to the rotunda could see his face all the way up. However, the approach to the staircase was so narrow and dark that just 80 people per minute could file past the remains while a crowd of at least 500,000 waited outside under brilliantly sunny skies. It was a poorly conceived decision by the city fathers to host the president’s remains in such cramped quarters. Countless thousands of mourners never got their chance to enter the building by the time it closed for the night.

New York’s Funeral Procession April 25, 1865
The morning of April 25 dawned with mourners still lined up in desperate, if unrealistic, hope of passing by Lincoln’s remains at City Hall before the removal of his casket for the grand funeral procession scheduled to get under way at 2:00 p.m. later that afternoon.
The funeral hearse for the procession was in a word, magnificent. People who saw it were awestruck at its beauty and size. It towered over the city streets and crowds below, measuring 14 feet long by 7 feet wide. It was topped by a “Temple of Liberty” while national flags rose in groups of three out of the four columns. From the roof of the canopy, a gilt eagle hung freely so it would be directly over the coffin. The hearse was so massive and heavy that sixteen matching gray horses would pull it along the procession route. The two images below are a real photo of the hearse as it appeared that day in 1865, and a print of how the horses and hearse appeared during the procession itself. You may click the images to see larger versions. 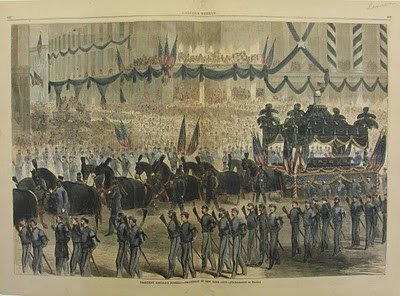 The funeral procession began on schedule at 2:00 p.m. It was led by mounted police, who were followed by high ranking generals and their staffs. The hearse was next, followed by approximately 11,000(!) soldiers marching to the sounds of muffled drumbeats. More representatives of foreign nations rode in the procession, their bright colors offering a marked contrast to the sea of black throughout the city. Union and trade groups, Masons, singing societies, various ethnic organizations and groups of children marched along. In addition to the 11,000 soldiers taking part, it’s estimated that at least 75,000 other people marched in the procession. Indeed, it was so massive that the parade of mourners took nearly four hours to cross a particular point from beginning to end. There were 100 bands playing, cannons fired, and church bells throughout the city tolled while the procession seemingly lasted an eternity.
Among the throngs of people watching the funeral procession that April day in 1865 was a young boy only six years of age. He watched from his grandparents’ home located close to Union Square. That child was Theodore Roosevelt, who in 1901 would become the 26th President of the United States upon the assassination of another president, William McKinley.
Perhaps the most pathetic group of marchers in the procession were 300 African-Americans who had to practically fight to be included in the wave of white faces. At first orders had come down from the mayor and city council that NO black people were to be permitted to take part in the procession, which would be almost unbelievable were it not sadly true. Originally, a contingent of 5,000 African-Americans had plan to take part until the orders from city hall came down. There was outrage among the population, for if Lincoln had worked so hard to achieve their freedom, they should surely be permitted to honor the man who freed them. Finally, a telegraph from Secretary of War Stanton arrived, ordering New York to allow the black mourners to march. But by then it was too late to organize such large numbers. In the end, there were only those 300 African-American people, and they had thoughtlessly been placed at the very tail of the procession.
Finally at around 4:00 p.m. that day of April 25, 1865, Abraham Lincoln left New York for the final time, even though his funeral procession would take nearly two more hours to complete. The next destination was the state capital of Albany, which waited to hold its own funeral for the 16th president. That will be the subject of my next post.