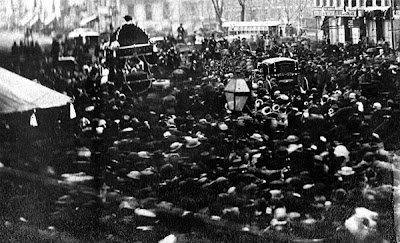 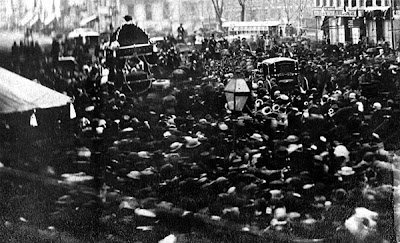 (Author’s Note: This posting continues my series about the assassination, death, and ensuing funerals for Abraham Lincoln in thirteen American cities. This year marks the 145th anniversary of one of the most tragic episodes in our nation’s history.)

The Lincoln Funeral Train slowly pulled out of the station at Albany, New York late in the afternoon of April 26, 1865. It would take the train fifteen hours to reach the next funeral city, Buffalo, New York. Along the train route, as along all the others, mourners lined the tracks, holding banners and signs, singing hymns, knelt in prayer. Twenty-five thousand people waited in Utica in pouring rain. In Syracuse, not reached until around midnight, at least thirty-five thousand stood to pay their respects as the train passed through. Former President Millard Fillmore (the 13th president) boarded the train in Batavia at 5:00 a.m. on April 27 and rode the rest of the way on the train to Buffalo.

The funeral which was held for Abraham Lincoln on April 27, 1865 was actually the second one the city staged. On the very day of the state funeral in Washington, D.C. (April 19), Buffalo held a mock funeral, it’s citizens feeling that attending church services was simply not enough to express their grief. They built a catafalque, held a large procession, gave prayers. All that was missing that day in Buffalo were the remains of Lincoln. The citizenry were stunned, then, to find out that their city on Lake Erie had been selected to hold an actual funeral!

Somehow, though, there seemed to be a bit of a letdown when the real ceremonies began once the Funeral Train arrived at 7:00 a.m. that day of the 27th. The same catafalque and hearse were used, the same order of the procession was staged, even the same hymns and music played. Massive crowds still swarmed the streets. (In the image above, you can see the crowd surrounding the hearse which is visible toward the left side, it’s canopy high above the people.)

At the same time, however, the crowds were so well-behaved and so silent, that many observers who had attended the previous funerals felt that the grief was not as palpable as in Philadelphia, where a near riot broke out. Looking back, though, perhaps it simply means that Buffalo citizens were better behaved than those in Philadelphia.

Lincoln’s casket was placed in St. Jame’s Hall, tilted at an angle so people could better view his face. Nearly 100,000 mourners filed past the coffin until 8:00 p.m. until the doors were closed. Through it all, not one disturbance was recorded by the police.

Among the mourners paying their respects 145 years ago today in Buffalo was a young man of 28 who would go on to achieve some measure of fame later in his life. His name was Stephen Grover Cleveland, better known by his middle name. He would go on to become county sheriff, Mayor of Buffalo, Governor of New York, and most importantly, the 22nd and 24th President Of The United States. He is still the only president who served two non-consecutive terms.

The Lincoln Funeral Train departed Buffalo at approximately 10:00 p.m. for another night run to the next city to be selected to hold an official funeral for Lincoln. That city was Cleveland, Ohio, the subject of my next post.