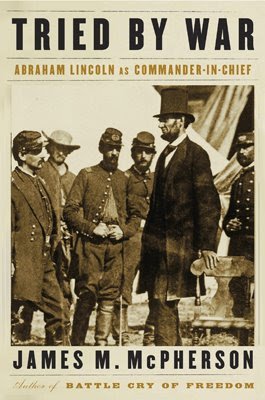 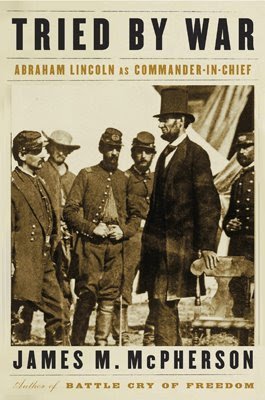 Today’s USA Today contains an informative and entertaining article, asking what lessons, if any, we can learn from Abraham Lincoln’s leadership as our nation is experiencing economic turmoil, war, social and political divisiveness, and fear that we are on the wrong track. The paper consulted a few historians, primarily James M. McPherson, for help in realizing how Lincoln’s example(s) might mean for us today.

Mr. McPherson is of course an historian and author of many books relating to both Lincoln and the Civil War. Retired from Princeton University, McPherson won the Pulitzer Prize for history for his Battle Cry Of Freedom, considered by many to be a definitive narrative of the Civil War. His new book, Tried By War: Abraham Lincoln As Commander In Chief, comes at a time when our country must decide who will lead us in time of both financial crisis as well as in two wars.

McPherson details in the book how Lincoln was the most “hands on” commander in chief in our history. Lincoln spent amazingly long hours in the War Department, reading telegrams detailing the outcome of battles, most of them Union losses in the first year of the war. He was so involved primarily due to the lack of good generals, such as George McClellan, who was always so to engage the enemy, or George Mead who failed to destroy Lee’s army after Gettysburg.

In McPherson’s opinion, Lincoln was so effective as a leader because he “never made a snap decision. He would mull over every aspect of a situation, examine all sides of a controversy, before he came to a decision.” At the same time, McPherson suggests it is a mistake for us today to forget that Lincoln was not “above politics” and was in fact a brilliant politician.

The article also has a couple of brief quotes from Harold Holzer, the nation’s eminent Lincoln scholar. Holzer states that America has often turned to Lincoln and his legacy in times of trouble, including World War II. We look to his leadership as an example of what represents the best of America. Holzer astutely points out that not only did Lincoln preside over the bloodiest conflict in our nation’s history, but he also led the country through a time of great financial upheaval (the Union had a very difficult time financing the war effort), similar to what we face today.

So what do the historians think Lincoln would advise to the next president? In McPherson’s opinion, it would be “Don’t panic, don’t make snap decisions, and keep your cool.” Wise advice to our leaders. Indeed, wise advice to us all.