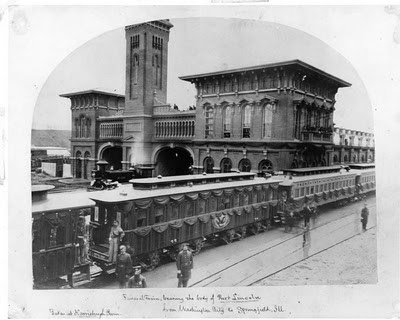 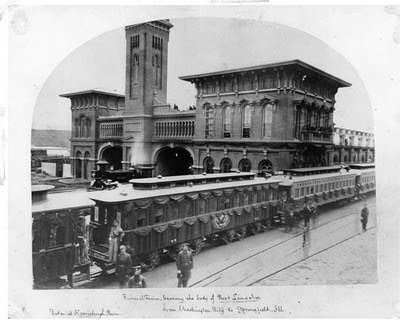 Horrible thunderstorms awaited the arrival of Abraham Lincoln’s Funeral Train in Harrisburg, PA on the night of April 21, 1865. Wicked lightning and torrential downpours ruined plans for a solemn funeral procession for Lincoln’s remains, but people still packed the station for the train, scheduled to arrive at 8:00 p.m. So many people waited that some later said they felt they would suffocate in the crowd.

Earlier that morning, Baltimore, Maryland had been given a scant four hours to bid goodbye to Lincoln, but Harrisburg was scheduled to host Lincoln’s remains overnight at the state Capitol House of Representatives. The Funeral Train arrived in Harrisburg on schedule after an unscheduled stop in York (PA) after people in that town begged to be able to pay brief respects.

The thunder and lightning gave a surreal backdrop in Harrisburg to the bells tolling and cannons being fired throughout the city. As the coffin was placed on the hearse, the crowd from the station gathered in the pouring rain and walked behind Lincoln’s remains as they were transported to the Capitol.

Harrisburg assured itself more time to allow its citizens to mourn than as the city leaders didn’t want to face an angry crowd like those of Baltimore. At 9:30 p.m., the doors to the state House of Representatives were open and mourners were given access until midnight of April 21. An estimated 10,000 mourners filed past Lincoln’s coffin, seated high on another catafalque.

The doors were re-opened again the next morning, April 22, at precisely 8:00 a.m. to give people yet one more chance to see Lincoln. The waiting Funeral Train, shown above at the Harrisburg station, had a schedule to keep and needed to depart at 11:00 a.m. for the next destination, Philadelphia. Bells tolled throughout Harrisburg again as guns fired salutes. At 9:30 a.m. Lincoln’s remains were removed from the state Capitol and transported in a grand funeral procession back to the Funeral Train. Taking part in the procession were the Governor of Pennsylvania, drummers beating on their muffled drums, soldiers, and other dignitaries.

The train slowly departed Harrisburg slightly behind schedule at 11:30 a.m. that day as it began it’s trip to Philadelphia. As it approached the city of Lancaster, the train slowed dramatically and nearly crawled past the depot. Waiting in the crowd was Lincoln’s immediate predecessor, former President James Buchanan who had come to pay his respects. However, the train did not stop in Lancaster as it continued it’s journey to Philadelphia.

The Philadelphia observances are the subject of the next post.