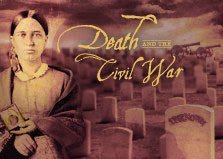 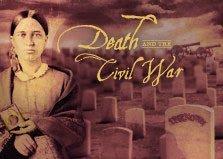 The American Civil War holds the fascination of millions of people throughout our nation as well as around the world.  There is almost a romantic attachment to it for many as they read about the “Lost Cause,” study the military strategies of the generals, and watch countless movies which depict the valor of the armies and individuals on the battlefields.  But for the people of 150 years ago who suffered the loss of a husband, a son, a brother, there was nothing remotely romantic about a war which caused death on a previously unimaginable scale.  The latest research places the estimated number of deaths at 750,000, or roughly 2.5 percent of the total American population (including both northern and southern states).  Projected to today’s population figures, that equates to the loss of 7 million lives. More Americans died in the American Civil War than in all other American wars combined.

Debuting September 18, 2012 on the long-running history program American Experience on PBS is “Death And The Civil War.”  Created by filmmaker Ric Burns (brother of Ken, creator of the masterpiece “The Civil War” for PBS in 1990), this film describes how profoundly the nation was affected by the slaughter of the war.  It’s based upon the book “This Republic Of Suffering” written by the noted historian and president of Harvard University, Dr. Drew Gilpin Faust.  The book was a finalist for the Pulitzer Prize in 2009 and was named to the New York Times “10 Best Books of 2008” by that paper’s editors.  I’ve been asked by a publicist for this film to watch a preview copy and review it here on The Abraham Lincoln Blog.  I present it here.

As this documentary points out, both sides in the American Civil War were “woefully unprepared” for the hundreds of thousands of deaths.  There were no national cemeteries at the beginning of the war.  No plan to bury the dead, for identifying the bodies, for notifying the families.  No one, either Union or Confederate, could have known at the beginning of the war that mass death was coming.  Lincoln had asked for recruits to serve for a 90-day period, thinking the war would be brief, as did the leaders of the Confederacy.  Indeed, by June 1861, two months after Ft. Sumter, combined deaths stood at 20.  Realization didn’t sink in until after First Bull Run (or Manassas) in July of that year that the war would not end quickly nor with a small number of casualties and death.

The film helps the viewer understand the concept of what a “good death” meant to Americans in the decades leading up to the war.  People expected to die at home, surrounded by family and loved ones, their final words recorded for posterity, perhaps.  They truly believed that in Heaven, their bodies would be whole again, restored to health.  The survivors could visit a grave, knowing that their departed lay in peace. But the war changed all that as their husbands and sons died alone or in the company of men they barely knew.  Records might indicate a soldier was barely injured, when in fact he had died.  Others were told their loved one had died, only to be stunned when the loved one came home alive. Many families never knew for sure what had happened; almost 140,000 Union dead remain unidentified.

Even as the war continued into 1862 and 1863, the governments of  both sides still didn’t assume much, if any, responsibility for their soldiers, living or dead. A young woman named Clara Barton, who went on to found the American Red Cross, organized her own army of nurses to tend to the wounded.  The U.S. Sanitary Commission, a private organization, was also begun to treat the sick and wounded soldiers of the Union.  The Confederacy also had private relief efforts.

Still, there were no coordinated efforts to bury the dead soldiers until long after the war began.  Surviving troops of a particular battle might bury their comrades if they had the strength.  Townspeople occasionally joined in as they did after Gettysburg.  Many times, the dead were left where they fell, so that even into the late 1860’s, bones were strewn across the scarred land.  The first concentrated effort to properly bury soldiers occurred in the late autumn of 1863, when the first “national cemetery” was opened in Gettysburg, PA.  Technically, though, the cemetery was then owned by the state.  It was that cemetery which was dedicated on November 19, 1863 when President Lincoln gave his immortal address.

The film spends time analyzing the Gettysburg Address with a full recitation of it, plus brief analysis by the interviewed historians. It points out, quite accurately, that in only 271 words, Lincoln was able to provide meaning to the deaths of the soldiers, to reassure Americans that “these dead shall not have died in vain.”  That the cause for which they fought and died was a noble one, one to assure that government of the people would not die.  At this point in the war, unfortunately, more than half of the total deaths resulting from it were yet to occur.

After the war ended, the U.S. Government finally went into action to arrange for proper burials of as many remains as possible.  Congress passed legislation creating the National Cemetery system in 1867, appointing Edmund Whitman to coordinate the establishment of cemeteries, identification of as many of the dead as possible, and the proper burial of the them.  It should be noted that this effort was made for the Union troops, not the Confederate soldiers.  The Federal Government was not about to pay respect to the soldiers which sought to destroy the nation.  This, in turn, caused bitterness and outrage among the citizens of the newly-restored southern states.  So the citizens of the south, mostly women, set up their own organizations to provide a fitting burial for their own soldiers killed in action.  A couple of the historians in the film seem to think that the government in Washington was harsh in not taking care of the southern dead, but as Vincent Brown (Harvard) points out, the Confederacy and its soldiers fought for the right to have a slave-owning nation.

The film concludes with a fascinating look at how Memorial Day (or Decoration Day as it was called then) was begun in the late 1860’s, both north and south, as the survivors wanted ways of commemorating their loved ones who fought for what they believed.

“Death And The Civil War” is a haunting, sobering, and deeply affective film.  It follows the now familiar method of historical documentaries by showing historical photos interspersed with interviews of various experts.  Dr. Drew Gilpin Faust is the main expert, since the film is based on her book I mentioned earlier.  Notable other historians in the film include Dr. David Blight (Yale) and Steven Hahn (Penn). Their insight is top notch as one would hope for from some of our greatest historians.

As can be expected of any documentary on American Experience, the film is gorgeous with outstanding cinematography, recreations, rare photos, and appropriate music.  The narration, by the actor Oliver Platt, is informative although I found the rhythm and pauses in his reading to be mildly distracting.

Given the topic of the film, it can be difficult to watch if the viewer happens to be squeamish.  Historical pictures of corpses, some in decay,  are shown, as are photos of skulls or skeletons.  Testimonies of those who buried the dead are read, complete with descriptive terms of “stench” and even “exploding corpses.”  If you have a weak stomach or are easily affected by descriptions of death, be warned.

At only two hours in length, the film doesn’t require a significant commitment to watch as those by Mr. Burns’ brother, Ken do.  Still, I wish it was even 30 minutes longer so yet more information could have been presented.  Lincoln’s assassination at the end of the Civil War, for example, also profoundly affected Americans for decades, yet this event is mentioned only very briefly in the film.  The deaths of the soldiers deeply moved him as well, a topic which he covered in his Second Inaugural Address in March 1865, only one month prior to his own demise.

“Death And The Civil War” premieres Tuesday, September 18, 2012 at 8:00 p.m. on PBS.  Check local listings for showings on your local PBS station.