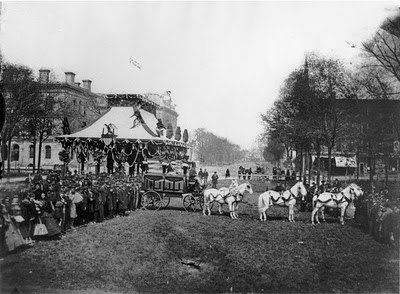 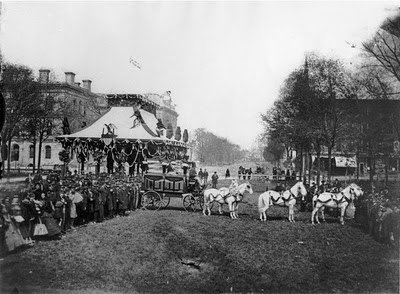 (Author’s Note: This year marks the 145th anniversary of the death of Abraham Lincoln at the hands of John Wilkes Booth, on April 15, 1865. Thirteen American cities staged funerals for Mr. Lincoln on his way from Washington to his final destination of Springfield. Cleveland, Ohio got its chance to honor the remains of the martyred president 145 years ago today, April 28, 1865. Here is the story of that day)

The Lincoln Funeral Train and its precious cargo left Buffalo at approximately 10:00 p.m. on April 27, 1865 and arrived in Cleveland, Ohio at 7:00 a.m. on Friday April 28., where the next funeral for the late president was to be held. A thirty-six gun salute (one for every state in the Union at that time, including the “Confederate” states) fired as the train arrived. It had been just one week since the train had departed Washington, D.C. Funerals had since then been held in Baltimore, Harrisburg, Philadelphia, New York, Albany, and Buffalo.

Along the way that night, the train passed through towns bordering Lake Erie. The town of Erie, Pennsylvania had been reached at 3:00 a.m. April 28, where city leaders had been mislead by the train officials into believing that no stops would be made between Buffalo and Cleveland. Erie officials hurriedly arranged a few dignitaries and a small torchlight gathering was held in honor of Lincoln, but it was far less special than they would have preferred.

Lincoln’s Funeral Train arrived at the Euclid Avenue Station at 79th Street, the same station Lincoln as president-elect had come to on his triumphal inaugural trip barely four years earlier. In that visit to Cleveland, Lincoln had spoken to people huddled in a steady rain on that February 1860 day, telling them that the disaffected people of the South were creating an “artificial” crisis, that slavery was still protected. In essence, Lincoln said that day, the government had done nothing to interfere with their rights to hold slaves there those rights already existed.

Now Abraham Lincoln had returned in death. His coffin was slowly removed from the Funeral Car as a crowd gathered in silence to witness history being made, albeit tragic history. A woman dressed in horizontal stripes of red, white, and blue held an American flag trimmed in black. Bells rang as in the other cities, bands played mournful hymns, and tears flowed freely.

After a short time at the station, the funeral procession got under way. It was raining that late April day in Cleveland, which is no surprise to those of us who live in northern Ohio. The rain matched the mood of the mourners, for it seemed that Heaven itself was crying. A positive about the rain was that it held down the dust in the streets during the procession, and the crowds could see the hearse, soldiers, and other marchers quite clearly. In the previous cities, the processions had been greatly obscured by huge clouds of dust.

The remains of Abraham Lincoln were taken to Cleveland’s Public Square (still in existence) where placed under a structure which strangely resembled a Chinese pagoda. It was an odd choice for a man who had never left the United States, but somehow, it worked. The image I’ve provided at the beginning of the post shows the pagoda and the team of horses still hitched to the hearse, containing the coffin. Below is another image of the pagoda-like funeral structure. 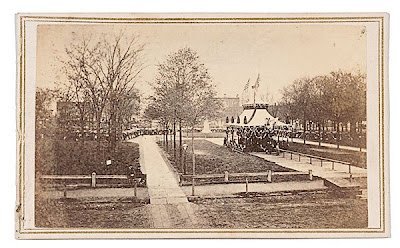 Cleveland had thought of something no other city along the funeral route had considered. By holding Lincoln’s viewing outdoors, there was essentially no limit to the number of people who could file past the coffin. All the other cities had selected the largest possible building to hold Lincoln, which restricted the mourners in those locations, leaving thousands disappointed. Cleveland , on the other hand, saw 180 people a minute file past in double lines on each side of the coffin, or 10,000 per hour. In the fifteen hours Cleveland was allotted, an incredible 150,000 people were able to pay their last respects. By contrast, New York City could achieve only 80 persons a minute.

The steady rain turned into torrential downpours as the massive crowds waited in line. As in Buffalo, and unlike Philadelphia, the crowds were orderly and mannerly, and no major incidents were reported. Viewing continued until 11:00 p.m. that night, when the remains of Abraham Lincoln were once again place on the waiting Funeral Train.

There was still another night run ahead, with the next destination Columbus, the state capital of Ohio. The funeral in that city will be the subject of my next post.