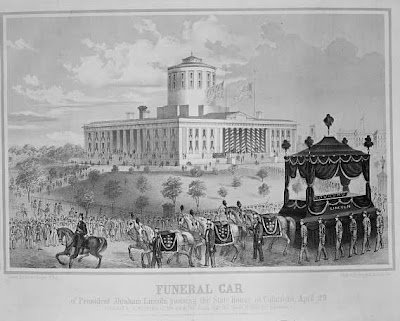 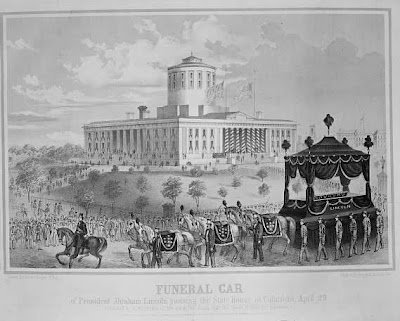 (Author’s Note: This post is the latest in a series I began on April 14, 2010 documenting the assassination and death of Abraham Lincoln. Thirteen cities held massive funerals for the fallen president, 145 years ago this year. Today’s post describes the events in the state capital of Ohio, the city of Columbus, on April 29, 1865.)

It was still raining in Ohio as The Lincoln Funeral Train made its way from the shores of Lake Erie in Cleveland to the center of the state in Columbus. Determined mourners still lined the tracks along the way, bearing torches in spite of the sometimes heavy showers. Some had travelled many miles simply to catch a quick glimpse of the train carrying the dead president.

The train arrived in Columbus at 7:30 a.m. on April 29, 1865, 145 years ago today. Pulling into the depot which was on that city’s High Street, people swarmed around the Funeral Car and other cars so much that authorities finally had to clear the people away for their own protection in case the train would lurch.

Lincoln’s coffin was removed and yet another funeral procession began. By then the rain had stopped and the sun shone beautifully for the ceremonies. It wound from High Street to Broad and through the business district as it made its way to the Ohio State House, where Lincoln would lay in state. The image above is a print of how the procession appeared that morning.

Columbus, like Cleveland, had chosen a pagoda-like structure for Lincoln’s remains. The seventeen-foot long structure carrying the president’s coffin was draped in black, and had a somewhat redundant “LINCOLN” along the sides in silver, as if the people wouldn’t know who was being honored. The hearse was pulled by white horses and followed by soldiers, bands, and the ordinary people as in the other cities. Below is a real photo image of the the hearse being pulled by the matched horses. 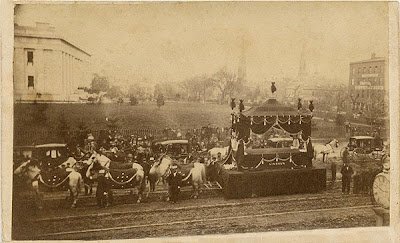 People who attended the services and viewing of Lincoln that day remembered it as a funeral of flowers. They were everywhere. People threw roses in the street. Injured soldiers threw hundreds of lilac blooms on the streets so the hearse’s wheels would crush them, causing the strong smell to waft along the route. The official mourners who had accompanied the train since it departed Washington were sickeningly reminded of the scent of lilacs in Washington. Through the remainder of their lives, they would relive the horrors of the assassination and funerals whenever they smelled that sweet fragrance. The memories of lilacs and Lincoln’s various funerals were so powerful that the poet Walt Whitman wrote “When Lilacs Last In The Dooryard Bloom’d” to commemorate the assassination.

Unlike the other cities, Columbus chose a simple catafalque for placing the coffin upon. It had no columns and didn’t tower over the setting at the rotunda. It was covered with still more flowers and moss in order to cushion the remains. The photo below is of the catafalque as it appeared that day.

People filed past, as many as possible, until the official funeral was held late in the afternoon. By the start of the official services, approximately 50,000 people had walked past the casket.

The funeral ended late in the afternoon that day and Lincoln’s casket was returned to the Funeral Train by 6:00 p.m. The next stop was Indianapolis as Indiana prepared to sadly say goodbye to the man who spent his formative years living in the southern part of that state.

The flowers which adorned the platform on which Lincoln’s casket rested were auctioned to the public at the request of the organization which had donated them, the Cincinnati Horticultural Society, The proceeds were given to the Ladies Aid Society of Columbus, who used the money for relief for families of soldiers and sailors. Some good had come out of the tragedy at last.

That’s not the end of the story in Columbus. So many thousands of visitors had not had a chance to pay their respects that the catafalque was replenished with flowers, so people could still see how things appeared in those brief hours the president lay in state. The Ohio capitol rotunda remained thus for visitors until May 4, 1865, when Springfield, Illinois held the final funeral for Abraham Lincoln.