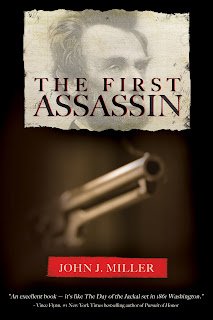 One of the things I most enjoy in writing about Abraham Lincoln is the opportunity to inform my readers of new or noteworthy books about him. While most of the books I write about in this forum are nonfiction, I just finished a novel about an assassin stalking President Lincoln in 1861. It’s one of the best thrillers I’ve read in recent years. The following paragraphs do not contain any spoilers as they are taken from the synopsis on the book’s back cover.

The First Assassin opens just weeks before Abraham Lincoln is to be sworn in as the nation’s 16th president. The southern states have of course begun to secede from the Union, with South Carolina especially a hotbed of anti-Lincoln sentiments. A plantation owner, Mr. Langston Bennett, outraged at Lincoln’s election and his strong anti-slavery position, hires an assassin to kill Lincoln before slavery is ended.

Meanwhile in Washington City (as the nation’s capital was called then), Colonel Charles Rook is determined to protect the president at all costs. He receives no support from the head of the U.S. Army, General Winfield Scott (of course a real person), in his mission to protect the president-elect. Nonetheless, Rook defies orders and organizes his own small team of spies consisting of U.S. Army soldiers to track various death threats to Mr. Lincoln. As certain murders happen in the city, it gradually dawns on Rook that he is up against a cold-blooded killer who will let nothing and no one get in his way in his attempt to kill Lincoln.

Along the way, the reader is introduced to Mrs. Violet Grenier, a resident of Washington City, who harbors strong pro-Southern sympathies. She uses her feminine wiles and standing as a dame of society to spy on Lincoln and help in the conspiracy against him.

The key to saving the president is a runaway slave named Portia who holds vital information about the assassin’s identity. It remains to be seen if she can provide it to the authorities in time.

As I wrote earlier, this book is historical fiction, a crime thriller. It’s serious, as opposed to the recent “mash up” novel Abraham Lincoln: Vampire Hunter. While this account in Assassin is fictional, it is based on real-life death threats Lincoln faced upon his election to the presidency. Lincoln continued facing threats throughout his presidency, of course falling to the final conspiracy.

I found The First Assassin to be very enjoyable. It is well-written with excellent character development. The female spy, Violet, is based on real-life women who spied for the Confederacy, who were not beneath using their “charms” (including sex) to obtain information they sought. It’s easy to understand the frustrations and tension Colonel Rook feels as the killer draws closer to Lincoln. When the assassin’s movements are followed by the reader, a chill occasionally rises as his cold-blooded murders take place. All quite gripping.

Some of the book is a tad predictable, especially a certain disguise the potential assassin uses. But that is the only quibble I have. I read the book (446 pgs) in just a few days, because I couldn’t wait to see how it ends.

Lincoln himself does appear briefly in the novel, as does his private secretary, John Hay. Lincoln’s actions of not wanting a lot of security are factual, as are some of the words he speaks.

The First Assassin is authored by John J. Miller, a frequent writer for Wall Street Journal, the National Review, and other publications. He has written books of nonfiction, but Assassin is his debut novel. The book was published just last week by AmazonEncore (yes, that Amazon as in the giant online seller). According to its site, AmazonEncore “identifies exceptional yet overlooked books and works with the authors to introduce or re-introduce their books to readers.” Mr. Miller originally self-published The First Assassin and it was readers of that edition who brought attention to AmazonEncore about the novel. The book may be ordered here.

I agree with those early readers and AmazonEncore. This is indeed an exceptional debut novel.