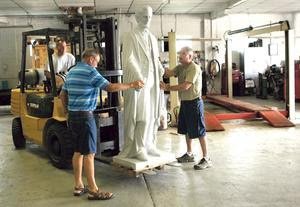 New statues of Abraham Lincoln keep springing up seemingly every month or two. The latest is going to be dedicated in Galesburg, Illinois on September 6 during the annual Labor Day celebration in that town.

I found the information about this statue on the Galesburg Register-Mail website. According to the article, the monument to Lincoln weighs in at nearly five tons and measures eleven feet tall. Impressive to be sure. No city money has been spent on this statue; the entire cost of $30,000 was raised and donated by a local group of armed forces veterans. There is some local controversy over the location of the statue, some wanting it in a local park. Instead, it’s to be erected near the local Amtrak depot, where nearly 99,000 people travel through annually.

Galesburg was the site of the fifth (of seven) debate held between Lincoln and Stephen A. Douglas for the U.S. Senate seat from Illinois in 1858. On October 7, Lincoln and Douglas met on the grounds of Knox College to argue their positions mostly on slavery. Lincoln was, of course, anti-slavery and against its expansion while Douglas was for “popular sovereignty,” i.e., letting the voters decide in the new territories whether or not to permit it. While Lincoln lost the election (held in the state legislature which was controlled by Democrats), he burst onto the national stage with his reasonable, well thought-out arguments. The debates led to his election as president in 1860.

The town of Galesburg has deep connections with Lincoln. The “Old Main” part of Knox College is the only surviving structure that served as a site for the debates between Lincoln and Douglas. Knox is home to the Lincoln Studies Center, one of the leading institutions in the country dedicated to studying the life of Abraham Lincoln. In addition, Galesburg is also the birthplace of the poet Carl Sandburg, winner of three Pulitzer Prizes, two for his poetry and one for his monumental biography of Lincoln.

It’s of course easy to understand why the local veterans’ group chose to honor Lincoln and his presence in Galesburg with a statue. I wonder, though, if the $30,000 might have been better spent in remembering Lincoln’s legacy. Lincoln always lamented his lack of a formal education and worked hard his entire life to make up for it. The money spent on this statue could have been used to establish scholarships in Lincoln’s name for Galesburg students wishing to pursue higher education. It could have been donated to the local school system for a library or new computers. The Lincoln Studies Center at Knox College could have used it for further research into his life or for preservation of important papers.

No one wants to honor the life of Abraham Lincoln more than I. However, I am of the personal opinion that we can remember his contributions to our nation in better ways than erecting yet another statue. I am interested in my readers’ opinions. What do you think?