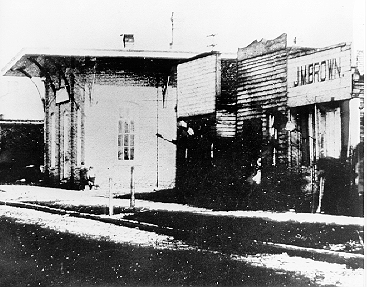 At this time 150 years ago today, February 11, 1861, Abraham Lincoln was in the initial stages of his Inaugural Journey to Washington, D.C. He was embarking on a trip which would take him across seven states, covering over 1,900 miles, and last for thirteen days. Along the way, he was greeted by enthusiastic crowds in cities both big and small, and at tiny settlements when the train would stop for more coal or water.

The route of course avoided the southern states, including even those just across the Ohio River, such as Kentucky or Virginia (there was no West Virginia until 1863). Indeed, by the time Lincoln left Springfield that February day in 1861, seven southern states had already left the Union. And Lincoln himself had already begun receiving death threats in the mail sent to him in Springfield.

Approximately 1,000 of Lincoln’s fellow citizens and friends in Springfield met him that day at the Great Western Deport at 10th and Monroe Streets in Springfield, just a few blocks from his home. (the photo I’ve included with this post shows the depot as it appeared in 1867, basically unchanged from how it looked the day Lincoln left.) Joining him on the long journey to Washington were his wife, Mary, and sons Robert, Willie, and Thomas or “Tad.” One Lincoln son, Eddie, died in 1850 and was buried in Springfield. Unfortunately, the Lincoln family pet, “Fido”, was also being left behind out of concern that his fear of loud noises would make the trip a living hell for him. Fido was left with a kind family.

Lincoln no doubt spoke with a heavy heart to the assembled crowd that day in Springfield. He had arrived as a newly licensed attorney in 1837, which virtually nothing other than the clothes on his back. Over the course of the next nearly 25 years, he had become a successful and fairly well-to-do lawyer with much experience through representing railroad companies. He must have had mixed emotions leaving the town which had come to mean so much to him, as he prepared to assume the Presidency Of The United States in less than one month.

The words Lincoln spoke that day to his friends and neighbors at the depot are some of the most moving he ever spoke or wrote. In just a few brief sentences, he conveyed his thoughts and deepest feelings about the journey ahead, and the turmoil waiting for him as he prepared to become President:

“My friends, no one, not in my situation, can appreciate my feeling of sadness at this parting. To this place and the kindness of these people, I owe everything. Here I have lived a quarter of a century, and have passed from a young to an old man. Here my children have been born, and one is buried. I now leave, not knowing when, or whether ever, I may return, with a task before me greater than that which rested upon Washington. Without the assistance of that Divine Being who ever attended him, I cannot succeed. With that assistance I cannot fail. Trusting in Him who can go with me, and remain with you, and be everywhere for good, let us confidently hope that all will yet be well. To His care commending you, as I hope in your prayers you will commend me, I bid you an affectionate farewell.”

With those words, Lincoln departed his home of Springfield, Illinois, never to see it again.