A New Memorial To Lincoln In Indiana 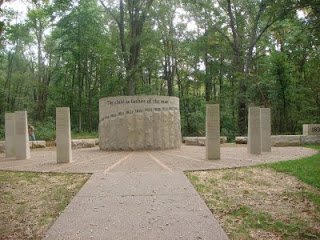 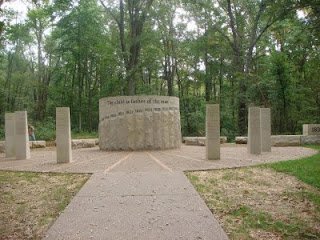 One of the nation’s newest memorials to Abraham Lincoln is located in Lincoln State Park, Indiana, almost immediately across the state highway from the Lincoln Boyhood National Memorial. The Abraham Lincoln Bicentennial Plaza was dedicated on June 12, 2009. I had the pleasure of visiting this new memorial during my trip last month to Spencer County, Indiana, where Lincoln spent 14 years living from the age of 7 until he reached adulthood at 21.

The plaza is really a bisected circle, each half representing different stages of Lincoln’s life. The front part of the memorial is in honor of Lincoln’s youth spent here in this area, while the part facing away from the entrance to the plaza honors his presidency. Here is an artist’s sketch of the plaza, which will hopefully give you a better idea of what the layout is. As the visitor enters the plaza, one can see various granite pedestals which contain quotes either from Lincoln himself or from those who knew him. An example of one such pedestal is shown below: 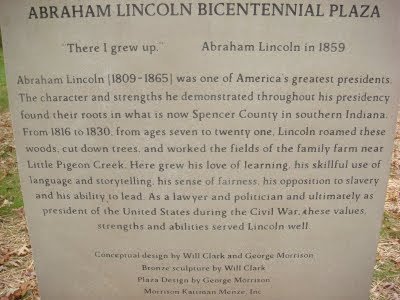 Others feature quotes from friends such as Nathaniel Grigsby (a neighbor of Lincoln’s in Indiana), and Lincoln’s secretary John Nicolay. One of these markers has the quote attributed to Lincoln in which he refers to his “angel mother.”
The main focus of the plaza is the center semi-circular structure depicted below. Each of the stone slabs with the dates over them represent the approximate height of Lincoln in that year as he grew to a final height of 6’4″ by 1830, when the Lincoln family relocated to Illinois. The other side of this structure contains the beautiful larger-than-life bust of Lincoln along with along with the text to his two most famous speeches, The Gettysburg Address and his Second Inaugural Address. 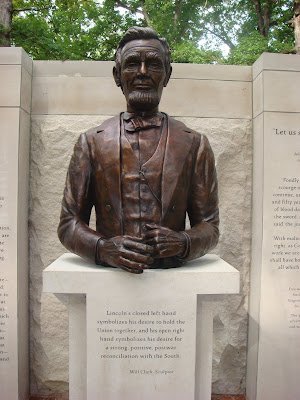 According to the description under the bust of Lincoln, his closed left hand represents his desire to hold onto the Union, to prevent one nation from becoming two. His open right hand represents his desire to “bind up the nation’s wounds” and extend “charity to all” once the Civil War was over. The photo below is a wider shot of the bust and the text of his speeches. The artists who came up with this design are Mr. George Morrison and Mr. Will Clark. The bronze figure of Lincoln, twice life-size, weighs 400 pounds. There are over 90 pieces of stone in the memorial, quarried in Indiana. The single largest slab of stone weighs more than 3,400 pounds.
I was struck by both the beauty and uniqueness of the plaza. While it certainly lacks the majesty of other memorials to Lincoln, it is very striking and far more interesting than a simple statue would have been. The quotes featured on the pedestals around the plaza help the visitor to understand Lincoln a bit better, and to get a feel for how people felt about him. I’m pleased that the portion representing his presidency includes the text of his speeches. The plaza sits in the woods which Lincoln knew so well. It’s a moving experience to visit the plaza.
Lincoln State Park is named not for Abraham, but rather his mother, Nancy Hanks Lincoln. The park includes the Little Pigeon Church where the Lincoln family worshipped and the cemetery where his sister, Sarah, is buried. More about that in the next post.