The Advent of the Aeroplane 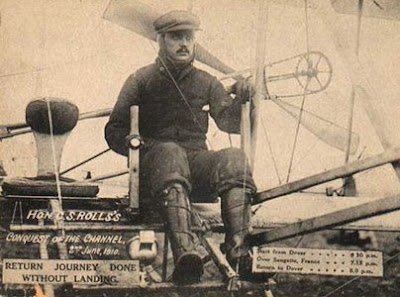 In his wonderful book, ‘Before the lamps went out’, Wingfield Stratford describes the early days of aviation from his unique view point. 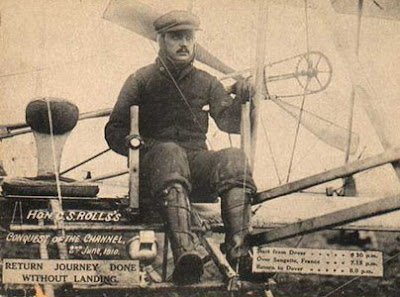 Charles Rolls
“In 1908, the long expected advent of the aeroplane came to reinforce that of the motor: and how excited one was on hearing that a man called Latham had attempted the almost incredible feat of flying the Channel, and actually got some way before falling into it; and then that another man called Bleriot had got safe across and landed in a field near Dover!
But after the wonderful and horrible things we had been taught to expect of aeroplanes in the prophetic romances of the nineties, these actual planes seemed a feeble anticlimax. If they were a source of danger to anybody, it was the devoted men who flew them, and never seemed to survive many flights. We were slightly acquainted with Charlie Rolls, whose inventive genius survives in the style Rolls-Royce, and who shortly afterwards capped Bleriot’s feat by flying from Dover to Calais and back without landing in France. He had the reputation of dare-devil recklessness both as a motorist and an aviator, and I believe had had one or two fearful smashes, though I remember him as a singularly unassuming and pleasant young man. But he was killed the month after his historic flight, at some Air Tournament, when he was quietly gliding down to make a landing on the aerodrome and at only about 30 feet over the heads of the crowd his tail plane came off and sent him into a fatal crash.

Another famous early aviator, Hamel, made a forced descent on one flight from France in a field belonging to a cousin of mine, a mile or two from our Kentish home, and was put up for a night and tremendously lionized, while most of the horse and man power in the village was enlisted to deal with the plane. Not so long afterwards we heard that he too had gone what seemed to be the way of all aviators.”