The Death of William Rufus 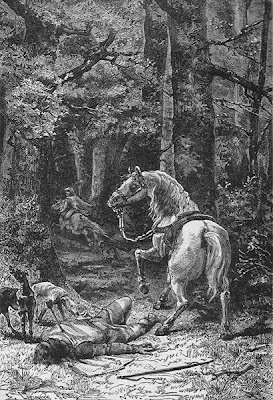 William II (1056 – 2 August 1100), the third son of William I of England, was King of England from 1087 until 1100. William is commonly known as William Rufus, perhaps because of his red-faced appearance. 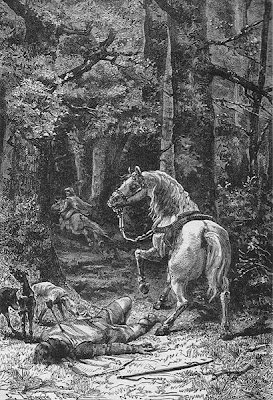 He seems to have been a flamboyant character, and his reign was marked by his bellicose temperament. He did not marry, nor did he produce any offspring, legitimate or otherwise. He died after being struck by an arrow while hunting, under circumstances that remain murky, and was succeeded by his younger brother Henry.
The two fullest accounts of his death name the same human agent,
William of Malmesbury’s version (c. 1125) goes like this.
“After dinner on 2nd August 1100 the king rode into the New Forest with a few companions to hunt. The party split up in search of deer, and the king was left alone with Walter Tirel. As evening was drawing in, a stag passed near them, and the king shot an arrow at it, but failed to kill; it fled westward, the king shielding his eyes to watch it disappearing into the setting sun. Then stag passed by, and in a flash Walter had loosed another arrow, the arrow struck the king, who died immediately without a word.”
Orderic Vitalis (c. 1135) tells a similar story. After recording portents, he takes the king swiftly to his doom. “He got up, mounted his horse and sped into the wood. Count Henry (his brother) and William de Brereuil and other great men were there; they went into the woodland, and the huntsmen were scattered in their various positions. The king and Walter de Poix  (Tirel) established themselves with a few companions in the wood, and waited eagerly for the prey, with weapons ready. Suddenly a beast ran between them; the king jumped back from his place, and Walter let an arrow fly. The arrow shaved the hair on the animal’s back, sped on and wounded the king standing beyond. He soon fell to the ground, and died instantly.”
Contrary to the above accounts according to his contemporaries William Tirel was often heard denying that he was in the same part of the wood that day or saw the king on the hunt.

Hunting accidents were frequent in every century, but whatever the circumstances in the death of the king, most considered it divine judgment on an unpopular ruler.