Publication of The Charge of the Light Brigade by Tennyson, 1854 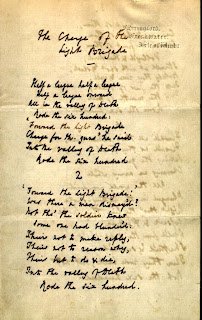 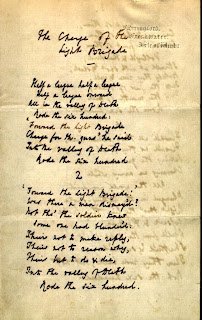 On 9th December 1854, the weekly magazine The Examiner included a poem written by the poet laureate, Alfred, Lord Tennyson called “The Charge of the Light Brigade”. The narrative poem tells of a disastrous cavalry charge during the Battle of Balaclava on 25th October that year as part of the Crimean War. The battle pitched combined British, French and Ottoman forces against the Russian fortified port of Sevastopol.

Because of a breakdown in communication, over six-hundred British light cavalrymen, led by the Earl of Cardigan, received orders to capture a heavily armed Russian redoubt (small enclosed fort) at the other end of a valley. The army commander, Lord Raglan, actually wanted them to prevent the Russians from removing naval guns from another complex of redoubts that they had captured. As it was, the Light Brigade lost over 150 men, either killed or taken prisoner, and around 120 men were injured. Over 300 horses were either killed in battle or destroyed later because of their wounds.

News of the charge reached Britain weeks later. On reading about it in The Times, Tennyson was immediately inspired to write a poem about the engagement, according to his grandson, Sir Charles. The piece not only extolled the bravery of the troops but also reflected public dismay at the apparent futility of the charge; consequently, it quickly achieved popular acclaim, even being distributed to the troops serving in the Crimea.

The text of “The Charge of the Light Brigade” is available on Wikisource.