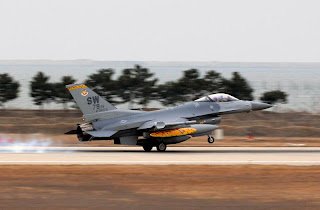 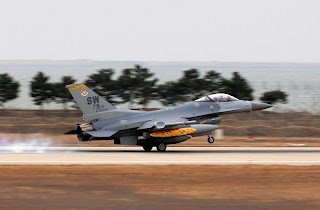 An F-16 piloted by the 79th Fighter Squadron commander lands at Kunsan AB, Korea, on January 15th. The unit, normally based at Shaw AFB, South Carolina, recently began a four-month AEF rotation to the Far East (USAF photo via F-16.net)
In a recent post, we noted the swap-out of Block 30 F-16s at the USAF’s 8th Fighter Wing, located at Kunsan AB, Korea. Over the past four months, the wing (better known as The Wolfpack) has been trading its older jets for newer, more capable Block 40 models. Aircraft previously stationed at Kunsan are moving to Eielson AFB, Alaska, where they will serve with a newly-formed Aggressor Squadron. And, in the midst of the aircraft transition, a CONUS-based F-16 squadron has begun a four-month deployment to the base.
Not surprisingly, the activity at Kunsan has attracted the attention of neighboring North Korea, which has issued a perfunctory propaganda blast. According to the AP, Pyongyang has criticized the recent deployment of a U.S.-based F-16 squadron to Kunsan, saying it will only “aggravate” tensions on the peninsula and disrupt nuclear negotiations.
“We will strongly cope with any provocation and pressure that threaten peace and stability on the Korean Peninsula,” the North’s Committee for the Peaceful Reunification of the Fatherland said in a statement carried by the official Korean Central News Agency.
Anyone who knows anything about the DPRK understands that Kim Jong-il and his minions will slam the U.S. at the drop of a hat. The F-16 deployment merely provided the latest opportunity –and a pretext for continued stalling on the nuclear issue. North Korea recently missed a year-end deadline to fully disable a nuclear reactor and come clean on its various, nuclear-related activities. Arrival of the 79th Fighter Squadron (from Shaw AFB, South Carolina) gave Pyongyang an opportunity to shift blame for the impasse.
Of course, if the squadron hadn’t deployed to Kunsan, the propaganda ministry in Pyongyang would have found another reason to blast the U.S.–and justify their nuclear rope-a-dope tactics. If history is any judge, the standoff will persist through the deployment and continue long after the F-16 squadron returns home.
At this point, the North Koreans have simply decided that further cooperation isn’t in their best interest, and they’ve retreated to their familiar, recalcitrant position. They probably won’t budge on the nuclear issues until the U.S. and South Korea deliver more energy assistance, or move ahead with tougher sanctions. It’s the familiar “stall/threaten/stall some more/concede/fail to comply/stall/threaten/stall again” approach that Pyongyang has repeatedly used in its dealings with Washington and Seoul. And, contrary to the propaganda proclamation, it has nothing to do with the number of U.S. aircraft on the Korean peninsula.
An article posted at F-16.net indicates that members of the 79th will remain in Korea through the end of May, working with their Wolfpack and ROKAF counterparts. The rotation is being described as a routine, Air Expeditionary Force (AEF) deployment to the Far East–an event that has occurred with regularity in recent years.
But the timing–and location–of the deployment is no accident. While the transition from Block 30 to Block 40 F-16s at Kunsan has been smooth, the presence of the 79th provides a little added “insurance,” in the event of possible transition “hiccups,” or if North Korea decides to start something.