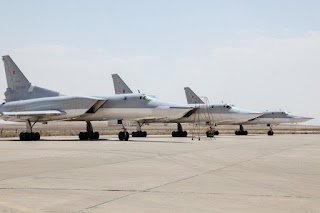 As we noted on Twitter (@natehale) earlier today, the difference between Vladimir Putin and Barack Obama can be summed up rather succinctly.  Mr. Putin plays geo-political chess; President Obama is stuck on “Words With Friends.”

Evidence of that analogy can be found in the Russian president’s latest move, which took many observers by surprise.  In a matter of a few hours, Putin not only altered the balance of power in the Middle East, he also established a serious threat to one of our military trump cards–the ability of U.S. carrier battle groups to operate and project power in the Persian Gulf and beyond.

Al-Masdar, the Israel-based Arabic news service, was among the first to report Mr. Putin’s move: the deployment of TU-22M “Backfire” bombers to Hamadan Airbase in west-central Iran.  Photos published on Al-Masdar’s website (and re-posted at Southfront.org) revealed at least four Backfires at Hamadan, along with support aircraft. 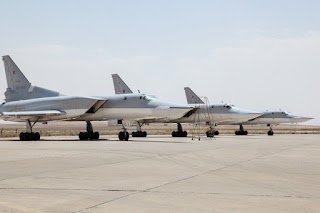 And less than 24 hours after they arrived, the Russian bombers launched a highly-publicized strike against terrorist targets in Syria.  It marked the first time since the 1979 revolution that Iran has allowed a foreign power to conduct military operations from its territory.  From the U.K. Telegraph:

Fighter escorts for the mission flew out of Russia’s Hmeymim airbase in western Syria. All aircraft returned to their respective bases after the mission, the ministry said.

Iranian officials confirmed that the country has offered Russia use of military infrastructure for its air campaign in Syria on Tuesday.

Tuesday’s mission is thought to be the first time Russian aircraft have flown missions from Iran since Moscow launched air strikes in Syria in September last year, and potentially marks a major expansion of Russia’s military presence in the Middle East.

Not surprisingly, many media accounts focused on Hamadan’s relative proximity to targets in Syria.  Operating from Iran, the TU-22Ms (and other Russian strike aircraft) can reach the battlefield sooner, carrying larger bomb loads and burning less fuel.

But Mr. Putin has another reason for deploying bombers to a forward operating base in Iran–and it has nothing to do with Jabhat al-Nusra, or efforts to prop up Bashir Assad’s regime.  Moscow’s motive for sending the Backfires to Hamadan is also rooted in sending a message to the U.S., and specifically, our naval forces which patrol the Persian Gulf.

For decades, our ability to project power in the region has been predicated (at least in part) on the Navy’s ability to send carrier battle groups into the Arabian Sea and the Persian Gulf.  The presence of a carrier helps ensure control of vital sea lanes of communication (SLOCs), used by supertankers carrying oil to markets in the Far East, Europe and even North America.

The presence of TU-22Ms at Hamadan poses a new threat to those shipping lanes–and our ability to keep them open.  While the Backfire is an aging weapons system–it first entered operational service in the early 1970s–it remains a potent threat to naval vessels.  In fact, the Russians largely designed it as a “carrier killer,” firing anti-ship missiles at long range.  The threat posed by the Backfire (and other Soviet-era bombers) was one of the key factors in development of the F-14 Tomcat and AIM-54 Phoenix missile, which were built to destroy enemy strike aircraft before they could launch against the carrier and its escorts.

For a naval strike mission, the newest TU-22M (NATO reporting name Backfire C) carries up to nine missiles, three AS-4 “Kitchen,” mounted internally or on wing pylons, or up to six AS-16 “Kickback,” carried on a rotary launcher in the weapons bay.  The AS-4 first appeared in the early 1960s and remains in production today; newer variants have been updated with a datalink (to allow mid-course updates).  The Kitchen can carry either a nuclear or conventional warhead; it has a maximum range of 320 nautical miles.

Like the AS-4, the Kickback was originally fitted with a nuclear warhead, and designed to blast through enemy defenses, allowing Russian bombers to reach their targets.  With a range of 160 NM, the Kickback was similar to the U.S. Short-Range Attack Missile (SRAM), which was carried on our strategic bombers for decades.  The AS-16 follows a dive profile, climbing to 40,000 feet before plunging down on its target.  At least one variant of the missile is designed to target enemy ships, including aircraft carriers.

Operating from Hamadan (or other bases in Iran), Russian TU-22s could target U.S. battle groups in the Persian Gulf while remaining over land, inside the coverage of S-300s and other advanced surface-to-air missile systems.  Moscow recently began delivering S-300 batteries to Iran and if they follow operational practices in Syria, the Russians could deploy their own SAMs near forward operating bases and integrate them with the host nation air defense network.

To be fair, the U.S. Navy has a number of counter-measures to deal with Backfires and their missiles.  In addition to the F/A-18s on the carrier, there are interceptor missiles (SM-2/3) on Aegis-equipped cruisers and destroyers, along with short-range defensive systems (Sea Sparrow, CIWS) on virtually all vessels.  TU-22M deployments to Hamadan–or other Iranian bases–won’t keep our carrier groups from sailing into the Persian Gulf, but it will be one more factor naval commanders must account for.  The same holds true for other American military assets in the region.

Which brings us back to Mr. Putin, who understands a thing or two about geopolitics and power projection.  In the span of less than a year, he has established a military presence that threatens both the eastern Mediterranean (and the Suez Canal) along with the Persian Gulf.  Meanwhile, the reaction here at home has been troubling, to say the least.  President Obama and his minions keep telling us that Putin’s strategy is doomed to fail–never mind the recent gains by Russian surrogates on the ground, and the return of Moscow’s military presence in key regions.  There is no evidence Hillary Clinton would try a different approach in dealing with Putin.

As for Donald Trump, he seems to favor giving Russia a free hand in the Middle East, as part of “better relations” with Moscow.  Such thinking is both naive and dangerous–no wonder Putin is on the march.  Leadership is on vacation in the U.S. and the former KGB Colonel is going keep rolling the dice; he has much to gain and virtually nothing to lose, both now and after election day.