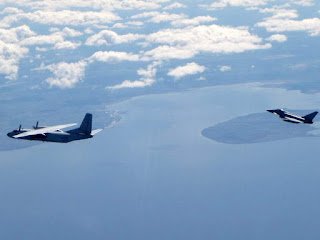 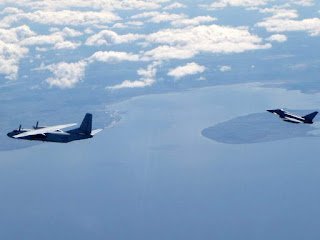 Recently, we’ve taken a few shots at NATO’s “Air Policing” mission in the Baltics.  And, we think the crews of the USS Donald Cook and USAF RC-135 reconnaissance aircraft would probably agree.  Fighter detachments from the UK and Portugal, which recently assumed the air police mission, were noticeably absent when Russian SU-24 strike fighters buzzed the Cook in the Baltic Sea and SU-27 interceptors did barrel rolls around RC-135s on two different missions off the Baltic coast.

In fairness, we should point out that the primary mission of the air police contingent is to protect NATO’s Baltic members, which lack their own air forces.  The Cook and the RC-135s were in international territory when they were harassed by Russian aircraft.  Perhaps NATO commanders determined that RAF Typhoons and F-16s from Portugal were too far away to respond, or they simply didn’t want to escalate the incident.  So, the Rivet Joint crews were on their own, as were the men and women manning the Cook.

But we are happy to report that the air police contingent is doing more than sitting on the ramp at their deployment bases in Estonia (where the Typhoons are based) and Lithuania, home for the Portuguese detachment will spend the next four months.  The UK MoD has proudly announced that its fighters conducted intercepts of three Russian transport aircraft in recent days, including an IL-76 Candid, the Russian equivalent of our long-retired C-141.

Interestingly, the Typhoons were scrambled because the Russian aircraft were not transmitting a recognized IFF code.  That’s the same excuse Moscow has used for those recent, aggressive intercepts of the RC-135s.  According to an RAF officer, intercepts of those lumbering transports were carried out in textbook fashion.

Well, jolly good, old boy.  Unfortunately, no one has yet answered why the air policing force won’t respond to incidents like those involving the Cook and the RC-135s.  While a UK official described the transport flights as “acts of aggression,” they pale in comparison to Russian harassment of the U.S. destroyer and aggressive maneuvering in close proximity to RJ aircraft.  Those episodes have the potential for disaster and you’d think the Atlantic alliance would be a little more forceful in its response.  But at least we can keep up with the Candids, Coots and Curls.

At this point, we’re guessing the Lithuanians, Latvians and Estonians are wondering what it would take to field their own air forces.  NATO’s intercept program–which appears to be a bit selective in nature–doesn’t inspire confidence.