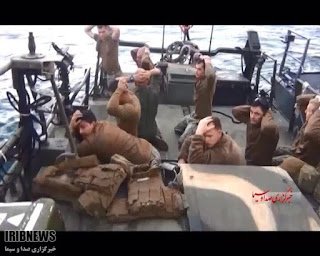 Tehran has released 10 American sailors who were detained yesterday, after one of their patrol boats became disabled in the Persian Gulf and drifted into Iranian waters near Farsi Island.

Secretary of State John Kerry praised the quick release, offering it as proof of the “new” relationship between Iran and the United States.  Mr. Kerry said our personnel were “Well treated by the Iranians, and provided food and blankets.  We can only imagine how a similar situation would have played out three or four years ago.”  Predictably, the Secretary failed to mention that four Americans are still being held by Iran, including Washington Post reporter Jason Rezaian.

Critics also noted that Washington is preparing to end sanctions against the Tehran regime and will soon release $150 billion in frozen Iranian assets.  Put another way, the mullahs had billions of reasons to release the U.S. sailors.

But not before engaging in a bit of predictable propaganda.  About the time the release was announced, Iranian news agencies produced photos of the American sailors, just before they were taken into custody: 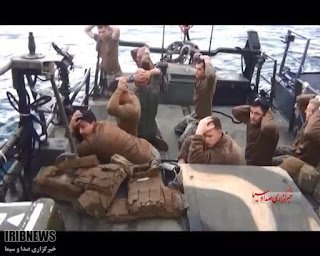 Crew members of US Navy patrol boat in the Persian Gulf, as they were being arrested by Iran  on 12 January (Iranian press photo)

Never mind that publishing such photos is against the Geneva Convention.  Tehran will never pass on an opportunity to humiliate the United States and if our military members are involved, that’s icing on the cake.  Incidentally, State Department spokesman John Kirby told Sean Hannity Wednesday night that the Iranian photos are not in violation of the convention, since the U.S. and Iran aren’t officially at war. Given Tehran’s actions towards America over the last 35 years–directly and through its proxies–one could make the case that Kirby is myopic at best, and delusional at worst.

And if that wasn’t enough, Iran also released video of one of the captured sailors “apologizing” for the incident.  More than likely, the service member in the video is a junior officer; watching his eyes and body language, he appears to be under duress.  We can only imagine what the IRGC threatened if he didn’t provide the apology.  As someone observed on Twitter, this is what happens when BuPers (the Navy’s personnel command) keeps cancelling your slot at Survival, Evasion, Resistance and Escape (SERE) school.  It’s quite possible the petty officer in the video was untrained for this type of situation and tried to muddle through as best he could.

The patrol boat incident is merely the latest example of concerted Iranian efforts to embarrass United States and highlight the weakness of President Obama.  Last October, with the ink still drying on the nuclear deal, Tehran conducted a missile test that was in clear violation of existing protocols.  At last report, the White House was attempting to delay additional sanctions for that launch.

And on December 26th, as the USS Harry Truman and its escorts transited the Strait of Hormuz, Iran suddenly announced a live-fire exercise and launched rockets only 1,500 yards from the aircraft carrier.  U.S. officials did not announce the incident until several days later, after the Truman returned to the Arabian Sea.

Iran also had the carrier in its cross-hairs yesterday, as the patrol boat episode unfolded.  A senior Iranian naval officer said the Truman and other allied ships began “maneuvering” as the American sailors were detained.  The Iranian admiral also claimed that his country’s anti-ship missiles were “locked on” to the Truman as the disabled U.S. patrol boats drifted towards his country’s territorial waters.

As we’ve noted in previous posts, locking onto a target (typically) involves fire control radars, which are detected by ESM systems on U.S. ships and aircraft.  Being locked on by the military forces of a hostile power is considered an act of war, and allows the targeted platform to defend itself.  There is no word on how the Truman responded to that highly provocative act, though it’s a fair bet that our response was benign.  Remember, this is the same commander-in-chief who sent a 45-minute warning to ISIS oil truck drivers before we started bombing their rigs.  Rest assured, Mr. Obama doesn’t want some military commander in the Persian Gulf disrupting the new rapprochement between Washington and Tehran.

So Iran scores another major propaganda victory while the U.S. again looks timid and weak.  It doesn’t take a foreign policy guru to understand that Iran will only be emboldened by this latest episode and new provocations are just a matter of time.

Meanwhile, there are a few serious questions surrounding the incident that remain unanswered.  The two patrol boats (actually, Swedish-built CB-90s) were transiting from Kuwait to Bahrain when one (or both) of the vessels suffered a mechanical breakdown.  Eventually, the boats drifted into Iranian territorial waters near Farsi Island, where they were detained by members of Iran’s Revolutionary Guards Corps (IRGC).

The most direct route from Kuwait to Bahrain is along the western side of the Persian Gulf; Farsi Island is more centrally located.  If the boats were following a direct route, they must have drifted for some time before reaching the Iranian-controlled island.  If only one vessel was affected by the engineering casualty, why didn’t the second boat take it under tow?  Why weren’t additional assets–including airpower–dispatched by 5th Fleet Headquarters in Bahrain?  The presence of Navy helicopters and F/A-18s overhead might have caused the Iranians to think twice.

And what about distress calls from the CB-90s to Navy command elements?  Early reports suggested the Navy “lost track” of its assets.  Perhaps someone can explain why the vast surveillance assets of the United States Navy couldn’t maintain radio and/or radar contact with a pair of patrol boats–or provide warning of Iranian activity.  Major surface combatants (along with airborne assets) give the Navy an impressive SIGINT capability on the high seas; assuming we were tracking Iranian activities, it would be nice to know what information commanders had as the episode unfolded and how it impacted their decision-making.

There are also issues involving the commander of the boat element, believed to be the junior officer who issued the on-camera apology.  Why did he offer no resistance when the Iranians began boarding his craft.  Article II of the U.S. Military Code of Conduct states “I will never surrender of my own free will.  If in command, I will never surrender the members of my command while they have the means to resist.”  A CB-90 is heavily armed, with .50-caliber machine guns, GAU-19 mini guns and individual weapons for the crew.  Obviously, no officer wants to see his command slaughtered; on the other hand, would it have been possible for the crew to resist, particularly with air support?

It’s also worth asking about the level of involvement by senior officials in Washington.  Press accounts suggest that Secretary of State John Kerry was involved in the earliest contacts with Iran and spoke with his counterpart in Tehran no long after the sailors were detained.  That quick response suggests the White House and State received early notification of the incident (reflecting the desired level of coordination).  But it also begs another essential question: were senior officials micro-managing the episode from Washington, and decided early on to avoid a confrontation with Tehran at all costs.

Obviously, this latest episode did nothing to inspire confidence among our long-time allies in the Persian Gulf.  Writing in the New York Observer, John Schindler notes that our latest Middle East debacle will provoke more saber rattling between Riyadh and Tehran.  The stage is already set for a major regional conflict between the traditional foes, and the specter of a nuclear war is very real.  At best, the recently-concluded agreement with Iran will only delay its nuclear ambitions.  If Tehran is running a parallel, covert development program, the timeline for an Iranian bomb may be much shorter.

And, as Dr Schindler notes, the Iranians can also acquire a nuke via “express delivery” from North Korea.  He refers to the frequent flights by Iran and North Korean IL-76 transports between those two countries, a subject we’ve written about on multiple occasions.  An IL-76 is more than capable of carrying a finished nuke from Pyongyang to Iran, and given the effective deception measures employed by both countries, our intelligence community could easily miss the delivery.

Across the gulf, Riyadh has its own emergency nuke plan.  The kingdom was a key investor in Pakistan’s nuclear program, in exchange for potential deliveries of weapons to Saudi Arabia if the need arises.  With Iran moving inexorably towards a nuclear capability (and America in full retreat across the region), the window for the Saudis acquiring their own nuclear arsenal is wide open.  As one DoD official told Schindler: “if Tehran announces on Monday they have a nuke, Riyadh will ‘suddenly’ have one by Wednesday.

As any mariner will tell you, the danger with drifting is that you wind up in places and situations you don’t want to be.  Sadly, U.S. policy in the Middle East resembles those two disabled patrol boats: adrift and heading for dangerous, uncharted waters.  Meanwhile, the man on the bridge, “Captain” Obama is waiting for his change-of-command ceremony, more than willing to let his successor sort the mess out in 2017 and beyond.