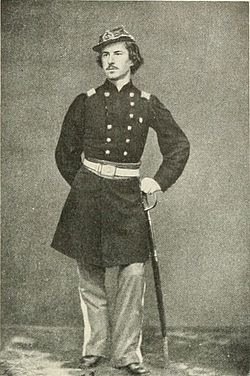 Today marks the 150th anniversary of the death of Union Colonel Elmer Ellsworth, the first notable death of the American Civil War. He was but 24 years old at the time of his death and his loss sent waves of grief throughout the Union. Other than his parents, no family felt his loss as keenly and as deeply as Abraham and Mary Lincoln, and their sons.

Elmer Ellsworth was born in the state of New York in 1837. Although he yearned to join the United States Military Academy at West Point, his grades were not good enough for that institution. He eventually moved to New York City, then relocated to Chicago where he studied law and became a law clerk. He was unusual among men of his era in that he strictly avoided tobacco and alcohol, much like Abraham Lincoln.

Ellsworth’s first love remained military science and not the law. In 1859, he formed the “Chicago Zouaves” a precision military drill team, based on the famous Zouave soldiers of the French Army based in northern Africa, primarily in Algeria. The Chicago Zouaves wore the same type of uniform as did the real Zouaves; open jackets, baggy pants, and colorful accoutrements.

The Chicago Zouaves led by Ellsworth went on a barnstorming tour of the Northern states in the months leading up to the Civil War. The “regiment” as it was called performed stunning acrobatic moves, swift actions with their weapons, including bayonets. and dazzling march steps. They took the crowds across the north by storm, and it didn’t matter one bit that the Zouaves, especially Ellsworth, never had seen real military action.

It was through these displays that Abraham Lincoln first met Ellsworth. A fast friendship began when Lincoln invited Ellsworth to Springfield in the late autumn of 1860, to continue his law studies by working for and with Lincoln. It turned out, though, that Ellsworth really helped in the presidential campaign by giving speeches and making appearances at various Republican functions. By now, Ellsworth was a famous man, and his efforts for Lincoln were noted during the campaign. Lincoln, according to author Adam Goodheart (1861: The Civil War Awakening), seems to have developed almost a “schoolboy” crush on the much younger and much shorter Ellsworth, who stood just 5’6″ tall. Indeed, the entire Lincoln family became quite fond of Ellsworth, practically “adopting” him into their family. After Lincoln’s election, he asked for Ellsworth to accompany the family to Washington.

Once Lincoln was in office, he requested several appointments in the regular Army for Ellsworth, but these didn’t pan out. Upon the attack and fall of Ft. Sumter, Lincoln requested 75,000 volunteers from across the Union to come to the aid of the nation. Ellsworth then immediately departed for New York City, where he proceeded to raise a regiment of New York firemen. The New York Fire Zouaves, about 1,000 in all, then came to Washington to help defend the city.

The state of Virginia held a referendum on May 23, 1861 to determine whether or not it would secede from the Union. The citizens of that state decided it would leave, dealing a blow to the efforts of Lincoln and others to keep the most politically important southern state from leaving.

It was then that a hotel proprietor in Alexandria, VA, raised a giant Confederate flag (The Stars and Bars) over his establishment. The flag was so large, in fact, that Lincoln himself could see it from his office window in the White House. The effect of seeing the flag so close to Washington was unnerving to Lincoln, and especially to Mary. Ellsworth knew this and embarked on this course of action which led to his untimely death.

Early on the morning of May 24, 1861, Ellsworth led his men across the Potomac River into Alexandria, where they proceeded to occupy the city’s telegraph office, hoping to cut it off from the rest of the Confederacy. Ellsworth then realized he was close to the hotel displaying the offensive flag. He impulsively entered the building and with two of his men climbed up the stairs to reach the roof. He cut down the flag and began carrying it back down the stairs.

It was then that tragedy struck. The hotel owner, one James Jackson, then swiftly pulled out a shotgun, fired, and killed Ellsworth instantly, the shot going through Ellsworth’s heart. One of Ellsworth’s men, Cpl. Francis Brownell, returned fire and killed Jackson on the spot.

The news of Ellsworth’s death traveled swiftly through his men and quickly came to the White House. The Lincoln’s, especially the president, were horrified and devastated at the death of their young friend. Later, Ellsworth’s body was taken to the Washington Navy Yard, where the president and Mrs. Lincoln arrived in shock to view the remains. Lincoln ordered that Ellsworth’s remains be put on view in the East Room of the White House, where a funeral was held for their young friend. The same day of Ellsworth’s death, Lincoln received two visitors, who were stunned to see the President Of The United States weeping openly. Lincoln told them men: “I will make no apology, gentlemen for my weakness; but I knew poor Ellsworth well, and held him in great regard. Just as you entered the room, Captain [Gustavus] Fox left me, after giving me the painful details of Ellsworth’s unfortunate death. The event was so unexpected, and the recital so touching, that it quite unmanned me.”

The Union, too, felt the loss of Ellsworth deeply. There was a funeral journey back to New York state, not unlike the journey that Lincoln’s own body would be given in less than four years from that day. Many people came to witness the train as it passed through cities and towns along the way. Song writers composed funeral marches. Currier and Ives, the leading print makers of the era, quickly produced a print showing the murder of Ellsworth, fairly accurately depicting the event.

While alive, Elmer Ellsworth was one of the most famous men in the United States. In death, his popularity grew even more as he became known as the first Union officer to be killed in the American Civil War. The young man with no military experience at all ironically became the first Union martyr.

Today Elmer Ellsworth is mostly unknown to those outside of the circle of Civil War and Lincoln historians and enthusiasts. There is a plaque today at the scene of Ellsworth’s death in Alexandria. It commemorates not Colonel Ellsworth, but his shooter, the owner of the hotel.

On this 150th anniversary of the death of Colonel Elmer Ellsworth, I choose to remember him.