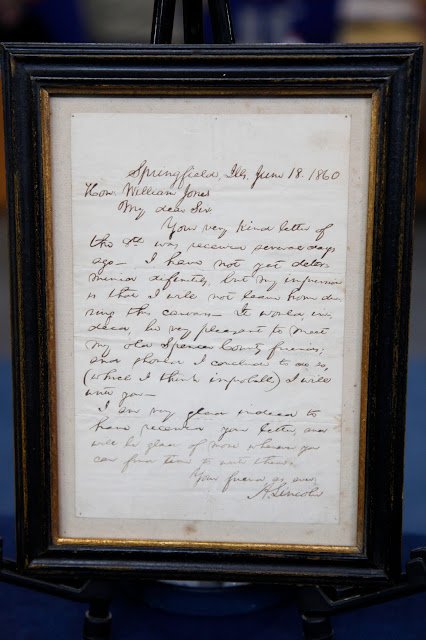 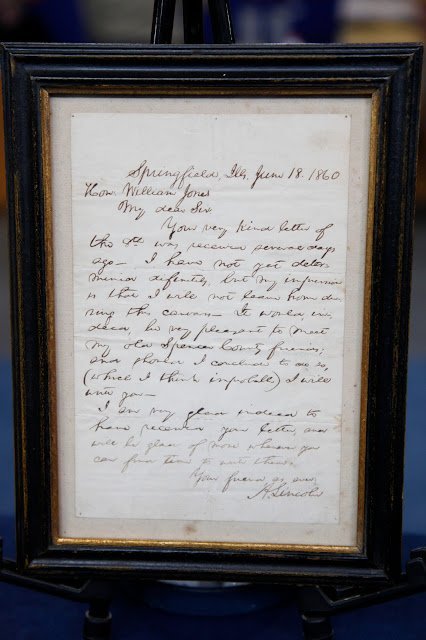 The long running Public Broadcast System (PBS) series Antiques Roadshow has “uncovered” a previously unknown letter written by Abraham Lincoln barely a month after his nomination as the Republican candidate for the 1860 U.S. Presidential Election.

The woman who brought the letter in for appraisal at the Roadshow’s stop in Myrtle Beach, South Carolina, found the letter in a desk she inherited from her parents.  They were collectors of antique furniture and had purchased the desk many years ago.  The letter, written to William Jones, is pictured in the photo above.  As you can see, it’s in wonderful condition with some light foxing around the edges.  A paper conservator will be  able to preserve the letter and keep it from further damage.

William Jones was basically Abraham Lincoln’s first employer. He lived in Spencer County, Indiana and was a well-to-do businessman.  Lincoln did odd jobs for him as he grew up.  Today you can visit the home of William Jones in Indiana.

The letter from Lincoln to Mr. Jones is a little illegible in the photo, but is a “thank you” to his old mentor and boss for the congratulations Lincoln received from him after the nomination.  Lincoln mentions Spencer County in the letter, saying that he misses his old neighbors there.  Lincoln’s signature is strong and clear, signed “A. Lincoln” as he typically signed his other letters.  I wrote in the opening paragraph that this letter is previously unknown as it’s nowhere to be found in the “Collected Works Of Abraham Lincoln,” a standard reference for Lincoln scholars and historians.

The appraiser of this Lincoln letter was Dr. Martin Gammon, director of the Rare Books & Manuscripts department for Bonhams and Butterfields in San Francisco. What value did he place on this Lincoln artifact?  You’ll have to tune in and find out.  Let’s just say that it’s enough for the owner to take a very special vacation should she desire to sell. His appraisal of this wonderful find may be seen in the next episode of Antiques Roadshow, scheduled for Monday February 25, 2013 on PBS at 8:00 p.m. Eastern Standard Time (EST).  Check your local listings as local stations often show PBS programs at different times.

An account executive with the series contacted me back in November to tell me about this wonderful discovery.  She asked if I’d publicize it for WGBH (Boston), the producer of the series.  I’m thrilled to do so for two reasons.  I’m obviously an Abraham Lincoln enthusiast.  And Antiques Roadshow just happens to be my favorite television program of all.  I love antiques and also collect Lincoln memorabilia.  So this discovery and appraisal are very exciting for me.

In addition, the executive with the show has asked me to join her, Antiques Roadshow appraiser Arlie Sulka, and perhaps another person or two, in a “Live Tweet” session on Twitter while the show is broadcast on Monday night.  I’m honored to be part of my favorite show.  I am “Mr_Lincoln” (@Mr_Lincoln) on Twitter, so I hope you’ll join me and the others on this week’s Antiques Roadshow!