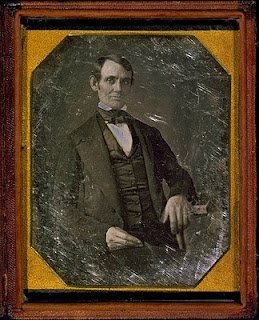 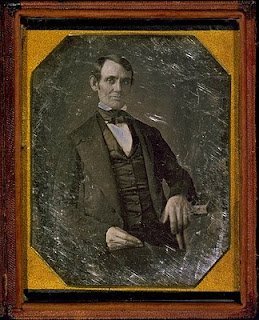 More than 201 years after his birth, and 145 years after his death, Abraham Lincoln continues to fascinate people around the world. His story has been told countless times in books, plays, magazine articles, movies, musicals, and even modern dance. I began this blog 2 1/2 years ago in order to share my own fascination with all things Lincoln, but it’s hardly the only such blog on the Internet. There is always room for more.

I’d like to bring attention to probably the most recent Internet site about Lincoln, and it has the makings of one of the best. Erika Holst is the author of “Lincoln Footnotes” which is both a website and a blog. The purpose of both is to share little-known stories about Lincoln, stories which, as she writes on her site “show up in biographies as footnotes, if they show up at all, but are nevertheless fascinating bits of history.” For example, Ms. Holst has already posted articles on her blog about Lincoln’s ties to the infamous Donner Party, Moby Dick author Herman Melville, and a political acquaintance who met an unfortunate end by being crushed by a political campaign pole. I’m intrigued already.

Ms. Holst is a trained historian who holds a Masters in Early American Culture from the University of Delaware’s Winterthur Program, and her B.S. is in History and English from Illinois Wesleyan University. She’s also worked, volunteered, and interned at prestigious museums such as The Abraham Lincoln Presidential Library and Museum in Springfield, Illinois. Her articles have appeared in History Magazine, and the Journal Of The Abraham Lincoln Association. Very impressive and a bit intimidating to those of us who are only amateurs.

Please visit her website and blog. I’ve already learned more about Abraham Lincoln from her efforts, and so will you.