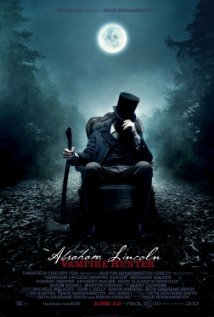 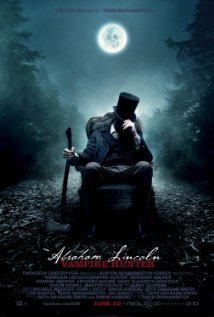 A little more than two years ago a mashup novel purporting to reveal the secret life of Abraham Lincoln landed in bookstores throughout the world.  “Abraham Lincoln: Vampire Hunter” by author Seth Grahame-Smith claimed that a previously unknown diary of Lincoln’s had been discovered which told of Lincoln’s real mission in life: to destroy all vampires.  The book was a surprise hit, effectively mixing the history of the real Abraham Lincoln and his fictional self as a hunter of the evil undead.  (click here for my review of the book)
In fact, the book was such a hit that it has now been turned into a major motion picture, released last week to a lot of publicity and excitement among fans of all things vampires as well as those intrigued by seeing their favorite president as action hero.  The film stars Benjamin Walker (“Flags Of Our Fathers”) as Mr. Lincoln; Dominic Cooper (“My Week With Marilyn”) as Lincoln’s “instructor” Henry Sturgess; Mary Elizabeth Winstead (“Live Free Or Die Hard”) as Mary Lincoln; and Rufus Sewell (“The Pillars Of The Earth”) as vampire leader “Adam.”  The director is Russian Timur Bekmambetov (“Wanted”), who co-produced along with famous filmmaker Tim Burton (“Nightmare Before Christmas”).  The screen play was written by the novelist of the book, Seth Grahame-Smith.
The film opens in 1818 when young Abraham Lincoln is only 9 years old.  His father, Thomas, has a confrontation with Jack Barts, the local slave trader, over the beating of a young enslaved boy, who happens to be a close (and fictional) friend of Abraham.  The confrontation turns ugly and Barts seems to promise retribution.   Sometime later, as Abe is reading in his bunk at night, a mysterious figure sneaks into the cabin and attacks his mother, Nancy Hanks Lincoln.  She dies a horrible death as a result, the attacker being none other than Barts, who also happens to be a vampire.  After his mother dies, Lincoln then sets out on a quest, promising himself that he will avenge his mother’s death.
As Lincoln grows into young adulthood, he has his confrontation with Barts, but it nearly ends in tragedy as Lincoln discovers he lacks the necessary skills to combat Barts effectively.  Luckily, Lincoln finds a savior in an English man, Henry Sturgess, who becomes his mentor, imparting his expert vampire hunting skills to the tall, strong Illinoisan.  Sturgess seems to have a special hatred of vampires, perhaps even more than Lincoln, and provides Abraham with list of “targets” after Lincoln moves to Springfield in 1837.  With his newly acquired skills, Mr. Lincoln dispatches a handful of these “targets” in Springfield, who pose as the living.
Life isn’t completely full of violence for Mr. Lincoln.  He is introduced to Miss Mary Todd, a fetching and eligible young woman of style and intelligence, and they begin a courtship, which is a somewhat pleasant distraction from the “killings” the viewer has already witnessed.  He also develops a close friendship with Joshua Speed (as in real life) who will go on to play an important role in Lincoln’s quest.
Meanwhile, slavery is threatening to tear the nation apart.  But in this film, the slaves are held in bondage not by not people, but vampires, who use them as a food supply.  Lincoln understands the dire threat to the Union and enters politics as a way to help contest the further spread of evil throughout the country.  Eventually, his political journey leads to him becoming President Of The United States. At this point, he tries to use the power of his words in the fight against the vampire element which has started a Civil War, but another personal tragedy leads him to once more pick up his ax, ready to eliminate the scourge of the nation: VAMPIRES!
Walker’s performance as Abraham Lincoln is for the most part accurate in its portrayal, especially when it comes to his quiet resolve and determination as both a young man and after he becomes President.  He brings a depth to the role that is surprising considering the film’s obvious focus on action and special-effects.  Hopefully the sheer madness of claiming Lincoln was a vampire hunter won’t obscure the fact that Walker is a revelation in his nicely done performance.
Dominic Cooper is excellent as Lincoln’s friend and mentor Henry Sturgess.  Eventually the viewer finds out just why Henry hates vampires so, and feels sympathy for him.  Cooper plays Sturgess spot on with the character in the novel, for which he and the director are to be commended.
Elizabeth Mary Winstead isn’t given a lot to do as Mary Lincoln in the film, but she is very charming and appealing in the role.  We don’t get to see any of the real-life Mary Lincoln’s extreme temper and bi-polar tendencies, but that isn’t really necessary here.

The premise of the movie (and novel) is, of course, ridiculous, over-the-top, and campy.  But as I wrote in my review of the novel, it all somehow works.  In fact, it works well.  The film’s combat sequences between Mr. Lincoln and his various enemies are stylish, exciting, and at times even gripping.  While I wish this film (and so many others) would use the “Matrix”-like slow-motion effects much less than they do, they are nonetheless well-done and effective.  The “choreography” of the fight scenes is quite good.  I’m not sure if the ax twirling is actually done by Walker or if it’s cinematic sleight-of-hand. It’s at times dazzling.  Yes, some of the film is gory as to be expected, but I’ve seen “slasher” films which are far worse.

As for the “history” imparted in “Abraham Lincoln: Vampire Hunter,” well, we need to remember that this is obviously mostly fiction.  Some of the “facts” are true:  Lincoln’s mother did die when he was 9.  He moved to Springfield in 1837, where he met his friend Speed and his future wife Mary.  The scene where the U.S. Capitol dome is shown unfinished during his inauguration is accurate, as is the platform on which he stood to take the oath of office.  The Washington Monument is shown incomplete, which is also accurate.  We cannot expect complete 100% accuracy, of course.  (That will be expected of Stephen Spielberg’s “Lincoln” bio-pic coming out in December)

I’ve read the novel and seen the film.  I have to be honest and state that I enjoyed the book more than I did the film.  As in any film adaptation of the novel upon which it is based, there are things left out, things added, and different events altogether.  The novel is, at times, gripping.  The film sometimes dragged a bit in my opinion.  The vampires could be a bit scarier; the ending of the film vs. that of the novel left something to be desired.  I would strongly recommend seeing this in 3-D, which actually adds a good bit to this movie, when it’s unfortunately only a gimmick for so many others.  The movie earns its “R” rating for violence, a brief (and unnecessary) “F” word, and a very quick sex scene including a glimpse of nudity.  Definitely not a film for teens much under the age of 17.

All in all, I liked this movie.  It’s exciting, entertaining, and harmless fun.  It’s not overly long and holds the viewer’s attention.