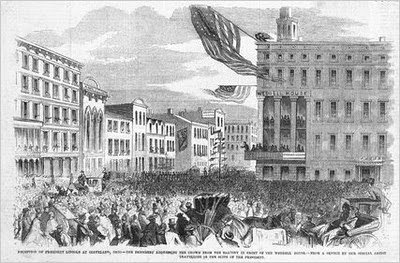 The morning of February 15, 1861 found Abraham Lincoln speaking to a crowd of about 5,000 in Pittsburgh, Pennsylvania. He had spent the night in the grandest hotel in the city, the Monongahela House, after a dreary, long ride the day before from Columbus, Ohio.

Lincoln, for some unknown reason, chose to speak mainly about the issue of a protective tariff, thought to help American manufacturers and workers. (compare this with today’s belief in completely open markets) The speech was one of the longer ones Lincoln had given during his journey at this point, and it more or less flopped. Even reporters who were with Lincoln criticized the speech and its delivery. The people were most concerned about the state of disunion going on in the country and to date, Lincoln had not offered anything of substance during his journey to Washington. It was Lincoln’s only speech in Pittsburgh, and it’s unfortunate his effort wasn’t better.

After this disappointing speech, the Lincolns and accompanying passengers departed Pittsburgh and headed northwest toward the growing industrial city of Cleveland, Ohio. It is unclear why the schedule had Lincoln going back into the Buckeye State, but this was the route his planners had made.

Along the way to Cleveland, there was another meal stop, this time in the town of Alliance, Ohio located in Stark County, which is where I make my home. It was Mr. Lincoln’s only visit to the county and it was not uneventful. Although his speech was of the same type as he’d given numerous times already (“I need to get to Washington, so farewell), there was a grand crowd waiting for him. An overzealous “gun salute” went off near where the Lincoln’s were eating, and the explosion shattered windows, even covering Mrs. Lincoln in pieces of glass. According to the New York Times report of the incident, Mrs. Lincoln remained calm (for once).

After the meal was over, the train continued on to Cleveland, where it was snowing heavily, which is very typical for a February day. The trip from the depot to the hotel where Lincoln and his family were staying that night was a distance of two miles and thousands were along the streets to see him.

Lincoln delivered a speech later in the day from his hotel (The Weddell House, no longer standing) to approximately 10,000 people. He touched on the same themes: the national crisis was “artificial,” the states still had all their rights under the Constitution. He did ask “Why all this excitement? Why all these complaints?”, referring to the South’s outrage over his election and their desire to expand slavery. The print above, courtesy of the Library of Congress, is a sketch of Lincoln speaking that day 150 years ago in Cleveland.

By now, Lincoln had been traveling by train for four days and the fatigue had already begun affecting his health. He had a bad cold and was very hoarse when speaking. Still, he was able to project his voice, a high-pitched one with a pronounced frontier accent, and everyone in the crowd could hear.

Once the speech was finished, Lincoln attended receptions in his honor at the hotel. Reporters wrote that the crowds were far more orderly in Cleveland than they had been in Pittsburgh.

This was Abraham Lincoln’s only appearance in the city of Cleveland while living Not much more than four years later, it was the site of one of his 13 majestic funerals as the citizens of paid their respects for a final time.