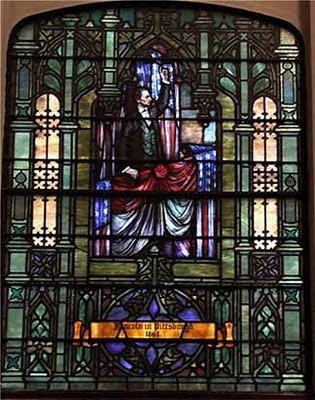 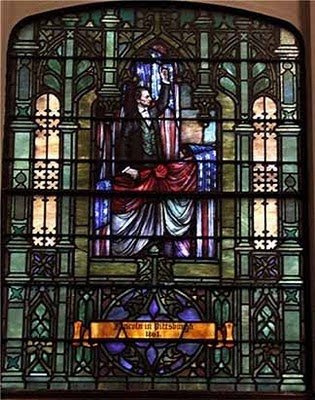 Abraham Lincoln and his family left the city of Columbus, Ohio early on the morning of February 14, 1861. The destination for the end of that day was the industrial city of Pittsburgh, Pennsylvania. The image I’ve included with this post is a stained glass window which depicts Mr. Lincoln speaking from the rear of his Inaugural train. It is located in the Smithfield United Church Of Christ in downtown Pittsburgh.

The weather in Columbus was cold with a chilling rain that day as the train left at 7:00 a.m. The crowd of people that morning, while not quite as large as the ones the previous day, still led to general confusion that morning and Mary Lincoln and her two younger sons nearly missed the train. But they caught it at last and the train went on to its destination. To help ease the boredom, some members of the party broke into song, singing popular tunes of the day.

The first stop at which Lincoln’s words were recorded that day are from Newark, Ohio. The train actually went too far past the depot for him to easily address the crowd there. He limited his remarks to that fact, saying that there wasn’t enough time to make a speech, and the “many fair ladies” had been “deprived…of observing” his “very interesting countenance.” His simply bade the town farewell.

Lincoln’s next stop of which we have records that day was in the small hamlet of Cadiz Junction, Ohio. This small place was the location of two railroads of the time, thus the name of the village, located a few miles from the Harrison County seat of Cadiz. This was a dinner stop for the party, and they were fed at the Park’s House, a hotel long since vanished. After dinner, Lincoln pronounced to the assembled crowd that he was “too full for utterance” but if they had time, they would organize the train and pass a vote of thanks to the people of the county.

Lincoln had time for a longer speech of more substance at the next town, Steubenville, Ohio. This city was the birthplace and early home of Lincoln’s eventual Secretary Of War, Edwin M. Stanton, but of course that was not foreseen at the time. Steubenville is on the banks of the Ohio River. At that time, the state of Virginia (now West Virginia) was across the river. Much like in Cincinnati two days earlier, Lincoln addressed Ohioans with points about the U.S. Constitution and the then-current troubles in the country. He stated that the people “on the other side of this majestic stream” wanted their rights under the Constitution. He pointedly asked just what their rights were under that document. He said that to decide that, the only was for a vote of the people across the country. If the majority did not want the expansion of slavery, then how could the minority still determine the outcome of the issue? He reiterated that if they (the Virginians) didn’t like the outcome of the vote (i.e. the presidential vote), then they had another chance in four years to elect a better man.

At Wellsville, Ohio the train halted for under two minutes, and Lincoln simply greeted the crowd and said farewell. But then a drunken man pushed his way through the crowd to shake Lincoln’s hand, admitting that he had voted for Stephen A. Douglas. Lincoln shook the man’s hand anyway, saying that the man and his friends should work to keep the ship of state afloat, and perhaps Mr. Douglas would have a chance next time of winning.

The Inauguration train finally left the Buckeye state and crossed into Pennsylvania, where he next spoke at the village of Rochester, just west of Pittsburgh. He intended on greeting the people, but as he was leaving a person asked what Lincoln would do with the secessionists. Lincoln replied “My friend, that is a matter which I have under very grave consideration.”

Then the Lincoln train was delayed for almost four hours after learning that a freight train had broken down ahead of them on the tracks. The party tried to make the best of it, but by then it was nearly dark and everyone was very tired and cold. Finally, a few hours later, the Lincoln train reached the city of Pittsburgh.

Lincoln spoke at the Monongahela House, Pittsburgh’s most luxurious hotel. He told the crowd that as he rode through the streets to the hotel, he thought that if “all the people were in favor of the Union, it can certainly be in no great danger – it will be preserved.” After a few more remarks of the same type, he told the crowd that he would make a longer, better speech the next morning. It had been a very long day and the weather was supposed to be better then.