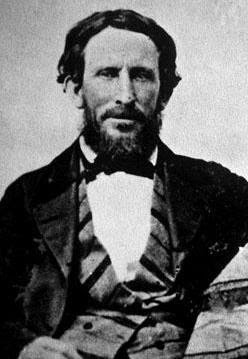 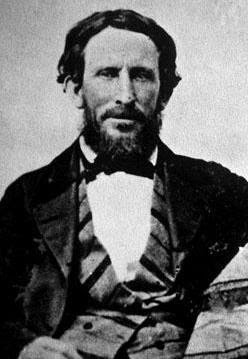 A couple of days ago, the Abraham Lincoln Presidential Library and Museum (ALPM) in Springfield, Illinois announced to various news sources that Abraham Lincoln’s writing had been found on documents which were carried by a member of the infamous Donner Party.

The Donner Party was the ill-fated group of pioneers who tried to reach California in a wagon train in 1846. The party was delayed by unfortunate circumstances and ended up being snowbound in the Sierra Nevada mountains over the winter of 1846-1847. About half of the roughly 90 members of the party died and some survivors apparently resorted to cannibalism to remain live. Much more detailed information about the Donner Party may be found on this excellent website.

James Reed, pictured above, lived in Springfield, Illinois in the 1840’s. He was one of the organizing members of the Donner Party (sometimes called Donner-Reed Party). He served with Abraham Lincoln during the Black Hawk War in Illinois in 1832. Lincoln and Reed both served as privates in their particular company, which saw no action in the war. (Lincoln later jokingly said the only battles he saw were those against the mosquitoes.)

On the muster rolls included in this James Frazier Reed Papers collection at the California State Library, Lincoln’s name is plainly found. Reed’s name is listed immediately below Lincoln’s. Researchers from the ALPM found two lines written in Lincoln’s hand, which helped to identify that he had a horse worth $85.00 and equipment worth another $15.00. I believe I’ve read in the Papers Of Abraham Lincoln that Lincoln’s horse was later stolen upon his discharge on July 10, 1832.

The entire report may be found at this website from CNN. It’s always news when a “new” Lincoln document comes to light. This helps historians fill in another piece of Lincoln’s military experience. And of course the association with the Donner Party makes these documents even more prized.

What an amazing story. Just goes to show that there is always something more to learn about Abraham Lincoln.