Lincoln Celebration At The Kennedy Center 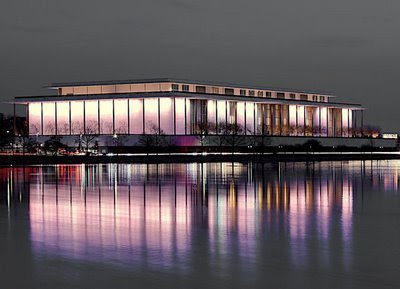 As my regular readers know by now, I was treated to a special “Lincoln Weekend” in Washington, D.C. a couple of weeks ago by my wife as a Christmas gift. I went to the Smithsonian Institution’s National Museum of American History, the U.S. Capitol, and The National Portrait Gallery in my quest for finding Mr. Lincoln. But those exhibits, as outstanding as they are, were not the highlight of the weekend.

The weekend closed for us this past Monday evening, February 2, 2009, with a truly special performance at The Kennedy Center For The Performing Arts in Washington. “Our Lincoln” was the special performance that night, helping to kick off the national celebration of President Lincoln’s 200th birthday.

“Our Lincoln” (click for the story behind the program) is the creation of the Kentucky Humanities Council, Inc., an organization which helps organize and promote the arts in that state. Featuring a cast of over 375 performers (95 percent of them Kentuckians), the concert performance tells the story of Abraham Lincoln through vocal and instrumental music, dance, actors, and even poetry. The music varied from folk to choral to opera, and I really had no idea what to expect.

Quite simply, the performance was brilliant. The combined choirs of the Lexington Singers and Children’s Chorale (one of the largest community choruses in the country), the University of Kentucky Chorale plus the University of Kentucky Symphony opened with a medley of Civil War era folk songs, including an absolutely haunting rendition of “Shenandoah,” one of my personal favorites. The chorales were superb.

Other musical interludes included a performance of Aaron Copland’s “Lincoln Portrait,” which I had never heard. The narrator for the piece was Nick Clooney, a legendary newsman from Kentucky, who happens to have a famous son named George. The music was nuanced and moving.

The American Spiritual Ensemble, a group of roughly 20 African-American singers treated the audience to the classic “Didn’t My Lord Deliver Daniel” plus two other songs which were sung with incredible power and volume control.

The audience was treated to selections from a new American Folk Opera, titled “River Of Time,” which tells the story of slavery and young Abraham Lincoln’s experiences with it in New Orleans. The full opera will debut later this fall. Lincoln’s reaction to slavery as a young man are not truly known, so the opera will be taken some liberties, if you’ll pardon the pun.

Probably the main highlight of the evening was the appearance of Mr. Mark O’Connor, who performed the beautiful “Ashokan Farewell,” which of course was the theme song of Ken Burns’ “Civil War” documentary. Mr. O’Connor was the artist who performed that song for the soundtrack.

Interspersed among the musical selections were actors portraying famous people from Lincoln’s life, such as Billy Herndon, Mary Owens (Lincoln’s first “fiancee” if legend is to be believed), and Emilie Todd Helm, Lincoln’s sister-in-law.

The evening closed as it should have, with a majestic rendition of “The Battle Hymn Of The Republic,” featuring the combined choirs and Spiritual Ensemble.

To the performers, the main narrator (Bob Edwards, formerly of National Public Radio), and the Kentucky Humanities Council, I offer my thanks and congratulations for a breathtaking and moving celebration of Abraham Lincoln. BRAVO!

Thus concluded my “Lincoln Weekend” in our nation’s capital. I had a great time and was sorry it was over so quickly. I never tire of Washington, D.C. since I’m obviously a student of history. In fact, I plan on returning this spring as a new Lincoln exhibit is opening tomorrow at The Library Of Congress, and Ford’s Theater is reopening. It’s a special time for those of us who are such Lincoln enthusiasts. By the way, for other highlights of my trip, click here and here for reviews of the exhibits at the Smithsonian; and here for some fascinating Lincoln items at the U.S. Capitol.