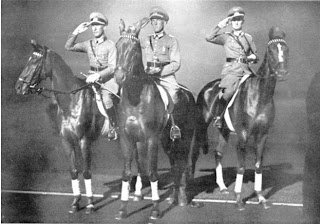 Without a doubt the 1936 Berlin Summer Games were the largest, most controversial and most nationalistic games of the modern era before the beginning of the Second World War. Originally awarded the rights to host the 1936 Games in 1932, prior to the advent of the Nazi’s Third Reich, Berlin saw some amazing performances and spectacular ceremonies. And for the home nation the 1936 Games were seen by the Nazi authorities as a way to validate their absurd theories of aryan superiority. Hence gold medals won by German competitors were at a premium. Remembered now in some quarters as an overall defeat for the ridiculous racist basis behind the Nazi theory of Olympic sport (thanks to the likes of Jesse Owens), there were still some amazing results from German competitors at these Olympics. The stoic and ultimately gold medal winning efforts of Leutnant Konrad Freiherr von Wangenheim can possibly be described as the most noble achievement by such a German gold medallist at the so-called Nazi Olympics.

As in previous Olympics (and as was to continue until 1948) the 1936 Berlin Olympics three day equestrian event was limited to military officers only. Somewhat bizarrely, considering the supposed peaceful intent of the modern Olympics, participants were usually cavalry officers who competed in military uniform. Von Wangenheim was like his fellow German team members allowed 18 months as part of his army duties to train on a replica of the Berlin Olympic cross-country course. Perhaps unsportingly well prepared, he and his team mates Captains Ludwig Stubbendorf and Rudolf Lippert entered the steeplechase phase of the three day event with Stubbendorf in first place after the dressage and Lippert in sixth. Von Wangenheim was in a rather lowly twenty-fourth, and this may well have contributed to how the cavalry Leutnant attacked the extremely hard corss-country course.

At the fourth obstacle, a combined hurdle and pond jump Von Wangenheim’s horse Kurfurst stumbled, with the rider being thrown violently to the ground, breaking the rider’s collarbone. As at this time there were no fourth riders in an equestrian eventing team at the Olympics, the three entrant riders and their horses had to finish each day’s event for the team as whole to stand a chance for a medal. So for the Germans to have any chance Von Wangenheim had to remount and complete the remaing 32 obstacles on the steeplechase course, then return for the final day and the showjumping section. Remounting Kurfurst, Von Wangenheim rode out the remainder of the 8 kilometre course. Von Wangenheim was not the only victim of this demanding stage of the Berlin Olympics three day event; amongst other national teams that had problems with the steeplechase and suffered injured riders or even killed horses were the Danes, the Americans and the Hungarians. However unlike his competitors, due to his determination and that of his horse Von Wangenheim and Kurfurst were able to attend the final day’s showjumping stage, held in the main Olympic stadium.

The final day of the three day event was held on a sunny but slightly cloudy warm August day in the main Olympische Stadion. At 1100 metres and with twelve obstacles, which had to be copmpleted in 155 seconds or less, the course would have been difficult for any fit rider and horse. The German cavalry officer on his horse Kurfurst however appeared at the venue for the jumps with his left arm in a sling. The significantly smaller field of 38 horses and riders were all ready to finalize their quest for team or individual Olympic gold. Von Wangenheim’s arm was removed from the sling and then tightly bound before he mounted Kurfurst and began his ride.

After surviving the first few jumps the German horse and rider combination reached a double jump, at which Kurfurst rushed. Von Wangenheim tried to control the horse by pulling back on the reins with both hands, however as the horse reared up it then fell backwards, toppling on top of the now fallen Von Wangenheim. For a moment it appeared to the remaining competitors and the approximately 100,000 spectators that Kurfurst was dead and that the crawling figure of Von Wagenheim was not going to be able to complete the ride. Germany would be denied a team medal after such a heavy fall to both horse and injured rider.

Amazingly Kurfurst rose up from its prone position, and with just as great an effort Konrad Freiherr Von Wangenheim returned to the saddle. No doubt motivated by several factors, but ultimately signifying an incredible strength of will and character the bloodied but unbowed cavalry officer took his horse over the remaining jumps. Completing the course in time and with his horse still rideable, Von Wangenheim helped secure a gold for himself and for his team mates Stubbendorff and Lippert. Stubbendorff also won the individual three day event gold medal. Fittingly the medla ceremony was held later that night in the main stadium, immediately prior to the closing ceremony. Von Wangenheim’s ride was arguably the greatest achievement of any German Olympian at these, the so-called Hitler’s Games. 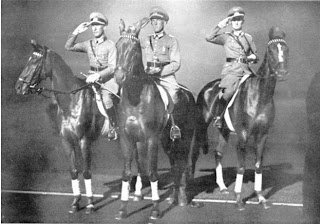