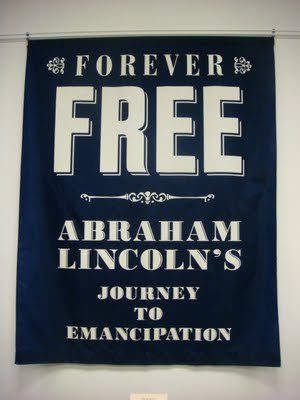 A couple of weeks ago, I travelled to the State Library of Ohio in Columbus to see an Abraham Lincoln exhibition I’ve been wanting to see for years now. The exhibition is “Forever Free: Abraham Lincoln’s Journey To Emancipation.” It tells the story of Lincoln’s admittedly rocky path he travelled from the time he supported colonization of African-American slaves in other countries to his issuance of the Emancipation Proclamation in 1863. The exhibition runs through April 15, 2011 in Columbus. Click here to see the next tour stops.
According to the information on the State Library of Ohio’s website, “the exhibition has been organized by the Huntington Library, San Marino, California, and the Gilder Lehrman Institute of American History, New York City, in cooperation with the American Library Association Public Programs Office. This exhibition was made possible by major grants from the National Endowment for the Humanities, promoting excellence in the humanities, and the Abraham Lincoln Bicentennial Commission, created by Congress and charged with planning the national celebration of Lincoln’s 200th birthday.”
The exhibition consists of a series of panels which runs 75 feet in length. Reproduced are photos of historic documents, political cartoons, photographs, and ephemera which documents early abolition efforts; what America was like during Lincoln’s youth; how the nation began dividing between anti-slavery and pro-slavery factions; the Civil War; the issuance of the Emancipation Proclamation; and the events which led to Lincoln’s assassination. See the photo below for an example of a section of one of these panels. 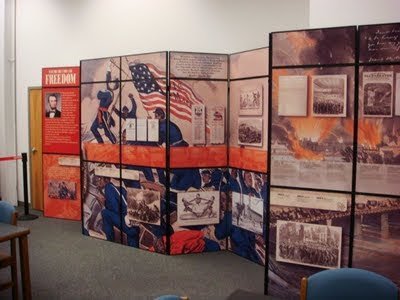 I found the exhibit to be very well done without hiding the fact that Lincoln was, at best, a moderate toward slavery in his early political career through the time he assumed the presidency. As I mentioned before, he even supported the now abhorrent idea of colonizing freed slaves, ejecting them from the United States, and forcibly colonizing them in African countries, such as Liberia. Some recent scholarship seems to indicate as well that he supported this idea as late as midway through his presidency. These facts may come as a surprise to those who believe that Lincoln was *always* “The Great Emancipator.”
Lincoln showed an extraordinary capacity for personal growth in office. Even if it was a political tool, he issued The Emancipation Proclamation on January 1, 1863, declaring any persons held in bondage in states, or areas of states, then in rebellion against the United States Of America, “Forever Free.” Yes, the Emancipation did not free slaves in the still-loyal border states. Neither did it apply to Union-controlled sections of rebellious states. However, by this time Lincoln had come to believe that slavery in the U.S. needed to be eradicated in order to save the Union.
The exhibit is a fascinating look at the evolving beliefs of Abraham Lincoln concerning slavery. It’s educating, well-told, and an impressive look at one of the worst times of American history.
Perhaps the most moving aspect of the exhibition for me was the artwork of young children who had drawn or colored pictures of their impressions of the story of slavery and Emancipation. Here are some of those pictures they drew: 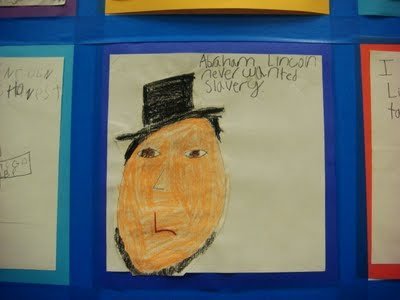 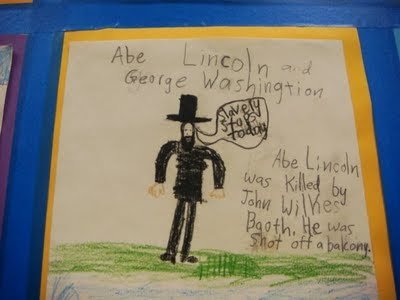 Obviously the story made a big impression on these young people. Hopefully they will remember these lessons about slavery, Abraham Lincoln, and the reasons why the American Civil War was fought. It’s important that they know the facts, and not revisionist history told today by neo-Confederates who insist the war was fought over tariffs and that Union was the aggressor.