Desecration Of A Lincoln Artifact 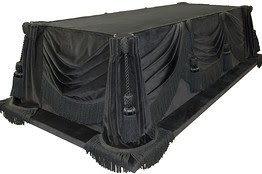 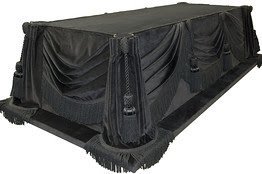 I’m normally very good about keeping up with current news about anything to do with Abraham Lincoln, be it a new exhibit, book, or findings of new documents as my previous post describes. So I’m a bit upset with myself today that I did not realize that when Senator Robert Byrd (D-WV) died last month, his remains lay in state in the U.S. Capitol on a very important artifact associated with Lincoln.

The Lincoln Catafalque, or bier, was constructed upon the death of President Lincoln. It was on this catafalque, draped in black mourning cloth, that Lincoln’s casket was placed for the official laying in state in the rotunda of the U.S. Capitol on April 19-21, 1865. It has since been used for other U.S. Presidents in this capacity, including John F. Kennedy and most recently for Presidents Ronald Reagan and Gerald Ford. It has also been used for other distinguished Americans such as Hubert Humphrey, General Douglas MacArthur, and the Unknown Soldiers of WWI, WWII, Korean War, and Viet Nam. When the catafalque is not in use, it is on display in the U.S. Capitol Visitor Center.

The motion to have Byrd’s remains rest on this catafalque was made by Senator Harry Reid (D-NV) and was passed in the Senate with no opposition.

I am personally appalled that Robert Byrd was granted this honor which is normally reserved for only the most deserving of people. In his youth, Byrd not only was a member of the Ku Klux Klan; he recruited an estimated 150 people to join it. While a member of the U.S. Senate in 1964, Byrd organized the second-longest filibuster in that chamber’s history in opposition to the Civil Rights Act. He voted against the U.S. Supreme Court appointments of both African-American justices Thurgood Marshall and Clarence Thomas. Though Byrd later apologized for the Klan membership and his Civil Rights Act filibuster, I wonder if he was truly as “rehabilitated” in his racial views as today’s politicians such as Bill Clinton claim. Yes, people can change in their lifetime, but Byrd’s actions on race outweigh his late-in-life apologies in my opinion.

As a student of Abraham Lincoln’s life and especially as an American, I am reminded how Byrd’s actions during his lifetime of opposing equal rights contrast with those of Lincoln. Lincoln fought against the spread of slavery and later helped to eradicate it from our soil. He fought for the 13th Amendment which abolished it completely. He believed in equal rights for everyone. Robert Byrd fought to withhold rights from people based purely on the color of their skin.

Robert Byrd is now the longest serving member of Congress in our nation’s history. But he surely did not deserve to lay in state on the Lincoln catafalque.