Danyon Loader: The Kiwi That Really Could Swim 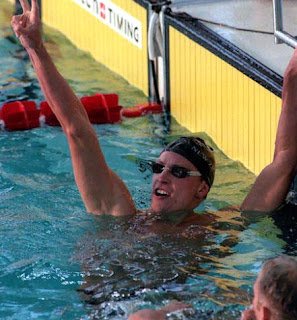 New Zealand has a long and very successful Olympic history, starting way back in 1894 when Leonard Cuff was voted one of the thirteen original members of the International Olympic Committee. Athletes from Aotearoa first went to the Summer Games as part of the Australasian team of 1912, then began competing independent of their larger down under neighbours at the 1920 Antwerp Olympics. It was in Stockholm that a Kiwi Olympian first won gold; Malcolm Champion who swam the second leg for the Australasian 4×200 metres men’s relay swimming team collected his gold medal alongside three Australians. It took another 84 years before another New Zealander would win gold in the swimming pool, and when it happened it was amongst one of the greatest Kiwi Olympic underdog performances of all time.

Before the 1996 Atlanta Summer Olympics the best hopes for Kiwi gold medals arguably lay in their equestrian, rowing and yachting teams. Blyth Tait and Mark Todd formed the core of a well-credentialled three day event team, whilst Barbara Kendall was returning in the women’s windsurfing event for which she won gold in Barcelona. Yet lurking behind the headlining favourites was Dunedin-raised Danyon Loader. Loader had shown some indication of what he may be capable of at the so-called Centennial Olympics when he took 3.36 off his personal best to win silver in the men’s 200 metres butterfly. Then at the 1994 Commonwealth Games in Victoria, Canada he had claimed a gold in the same event, whilst also winning 2 silvers (one in the 400 metres freestyle) and a bronze (the latter behind Australian 1500 metres Olympic champion Kieran Perkins) in the 200 metres freestyle. It would have been logical to consider Loader as a potential finalist in Athens but with the likes of Kieran Perkins, fellow Australian Daniel Kowalski, the Swede Anders Holmertz, American Tom Dolan and Italian Massimiliano Rosolino competing against him in the middle distance fresstyle events Loader would have to beat some big odds to win any coloured medal in the Georgia Tech Aquatic Centre’s pool.

Immediately prior to the 1996 Atlanta Olympics one of those opponents suffered a shock defeat. Kieran Perkins failed to qualify at the Australian Olympic Swimming trials in the 400 metres freestyle, the distance for which he held the then world record of 3 minutes 43.20 seconds. However Dolan was still much fancied, whilst it was expected by some that Kowalski would replace his more famous Australian compatriot as the great down under chance. However Loader had an attitude shared by so many of his compatriots, a Kiwi sense of self-belief and self-reliance. Later he would express this determination this way:

“When we were introduced to the crowd before our races, there would be huge cheers for the Americans and the Australians, but when a New Zealander was announced, there would only be applause from our team-mates. It made me very determined. I’d think, ‘Don’t you write off the underdog! Don’t you count out the New Zealander – don’t you dare!’ “
The first opportunity for Loader to show up his more fancied rivals came with the 200 metres freestyle. The Kiwi swam a very credible 1.48.48 which may have been almost 2 seconds slower than then world record still gave him the second fastest qualifying time for the final. His nearest rival was Brazilian Gustavo Borges who swam a slightly slower heat and took lane one in the final, to Loader’s lane five. Kowalski had a disappointing qualifying time whilst Holmertz from Sweden was the fastest qualifier with a time only seven hundredths of a second quicker than Loader. The underdog Kiwi was now very close to becoming a red hot chance for gold.

In the final of the 200 metres freestyle Loader was behind Holmertz until the third 50 metres, where taking the chance to hit his opponents at a phase in the race when they would be gathering themselves for the last lap he surged, grabbing the lead, As much as Holmertz tried and Kowalski came back the New Zealander finished the final with a time of 1.43.67, almost half a second in front of the Brazilian Gustavo Borges who claimed silver. “God Defend New Zealand” was finally going to be heard at an Olympic swimming meet for the first time, and the pony-tailed Kiwi from Timaru had done something many more fancied swimmers from taditional Olympic swimming nations couldn’t match.

Danyon Loader wasn’t finished however in Atlanta. His favourite event, the 200 metres butterfly was held the following day and unfortunately he wasn’t able to repeat his success from Barcelona. The Russian world record holder Denis Pankratov completed the butterfly double with his gold medal, whereas Loader couldn’t even qualify for the B final. It could have been expected that Loader would have been satisfied with one gold medal. Yet again he was to surprise the swimming world and show why New Zealanders will always be tenacious competitors at the Olympics.

With the heats of the 400 metres freestyle beginning and the world record holder Perkins out of contention Tom Dolan had emerged as the gold medal favourite. However Dolan was feeling the effects of winning the 400 metres individual medley gold two days earlier, and his time of 3.53.91 in the fifth heat meant he wasn’t in the final. In the fourth heat the Italians Massimiliano Rosolino and Emiliano Brembilla qualified for the final with times that were approximately six seconds behind Perkins’ world record. Third fastest qualifier was Jorg Hoffman, whilst Loader was fourth quickest (this claiming lane six in the final). New Zealand was poised to claim another swimming medal, and it was up to Loader to deliver.

In the final held on July 23rd the Swedish swimmer Anders Holmertz again took the field out and swam to the lead. Loader was well placed at the half way mark and Kieran perkins observed after watching the race:

“I knew by the 200m mark that Danyon couldn’t be beaten. He can beat any swimmer in the world if the field isn’t more than half a body length ahead at that stage. Danyon is so good you can’t afford to give him even a sniff over the final stages.”
Danyon Loader took the lead at approximately 290 metres and with just over two laps of the pool to go remained unheaded. Again Daniel Kowalski from Australia came back into the leading pack to claim bronze, but between him and the frontrunning Kiwi was British swimmer Paul Palmer. Then after 3 minutes 47.97 seconds after he had dived into the pool Loader completed his amazing Olympic double, winning a second swimming gold for New Zealand. The Atlanta 1996 swimming meet was remarkable in that competitors from Belgium, Costa Rica and Ireland had each won gold medals in the pool, but for the Kiwi swim team which had long laboured under the shadow of their more glamorous down under neighbours Australia it was a magic time. And Danyon Loader was the chief conjuror. As a mark of respect for the man Australian swim coach Don Talbot called “The Quiet Assassin”, Danyon Loader was appointed in June 2007 the New Zealand Olympic Committee’s first official ambassador, and in many ways his achievements in Atlanta show why New Zealand Olympians will always be proud representatives of their country. 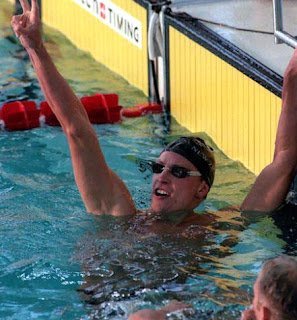