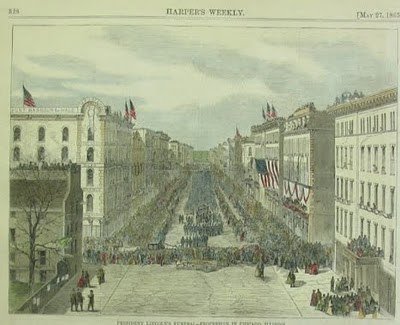 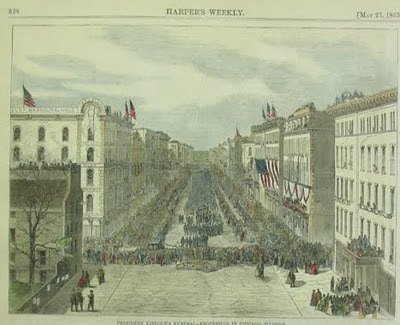 (Author’s Note: More than two weeks ago, I began a series on this blog dedicated to Abraham Lincoln, in commemoration of his assassination and ensuing funerals which occurred 145 years ago in 1865. Each blog post thus far has coincided on the anniversary of the particular event associated with one of the worst periods of time in American history. This post discusses the magnificent services for Lincoln held in Chicago, Illinois on May 1 and 2, 1865.)

Abraham Lincoln was at long last back in Illinois, which had been home to him since 1830, when he moved there at the age of 21. It was here on the prairie where he first struck out on his own in New Salem, along the banks of the Sangamon River. Springfield next became his home in 1837, a city which remained home until he left for Washington in 1861 after his election to the presidency. But until he could finally return to Springfield, the American Midwest’s largest city of Chicago needed to say goodbye to Mr. Lincoln.

The city of Chicago was no stranger to Abraham Lincoln, nor he to it. He argued many cases there as a young lawyer, including his first major case in 1856 pitting a railroad company against a bridge company. It was also in Chicago where Lincoln and his rival Stephen A. Douglas spoke in 1858, just prior to beginning their series of debates for the U.S. Senate election of that year, which thrust Lincoln into the limelight. Most importantly, however, was that Chicago was the scene of the Republican Convention of 1860 at “The Wigwam.” It was in that building where Lincoln’s campaign managers brilliantly out-maneuvered those of his opponents, securing the presidential nomination for The Rail-Splitter on May 18, 1860.

Now almost five years later, Chicago played host to Abraham Lincoln for a final time. At approximately 11:00 a.m. on May 1, 1865 the Lincoln Funeral Train pulled into Chicago, where hundreds of thousands of mourners waited to pay their respects. Rather than pull into the main depot, however, the train stopped on a trestle built a short distance into Lake Michigan. The train remained still, with only its bell tolling its arrival. The below photo shows how the scene appeared that morning. 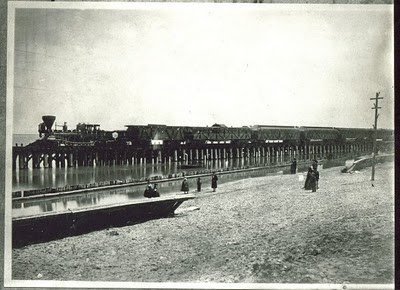 Lincoln’s remains were removed from the train shortly after its arrival to a platform which rested underneath a spectacular arch. The Gothic structure was magnificent, beautiful, and soaring. The city had spent $15,000 on it and the decorations in the Cook County courthouse, where Lincoln would lay-in-state. That total was half of what Washington had paid for the entire funeral for Lincoln! Below is a photo of that stunning arch. 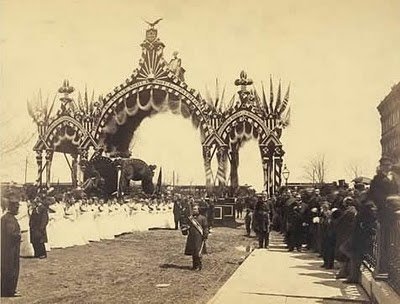 The funeral procession which took place from the arch to the courthouse in grandeur and size rivaled those in Washington and New York. I’ve included a photo of a print of the procession as it traveled along Michigan Avenue. There were thousands of soldiers, trade union members, the requisite dignitaries, and ordinary people taking part, including 10,000 school children. The hearse itself was flanked by six pall-bearers who were personal friends of Lincoln’s from Chicago. Pulled by eight matched black horses, the hearse was as ornate as the ones in the other cities.
People clamored along the procession route to find the best viewing opportunities. If a good spot in a building couldn’t be found, then a ladder or even trees would do. Some trees were so full of people that they appeared in danger of snapping in half, such was the weight they bore. Mottoes and banners where everywhere, including “The Heavens Are Draped In Black” written on many. Indeed, there was so much black crape everywhere for so many days, that it seemed as if Heaven itself was mourning.
Eventually, the Cook County courthouse was reached. Lincoln’s casket was removed from the hearse and placed inside the building as the courthouse bell rang so loudly it could be heard throughout the city of 300,000. The building like all the others in the city was covered in mourning. The photo below shows how it appeared that day. Look at the blurred line of visitors streaming down the steps after they had paid their respects to the president. 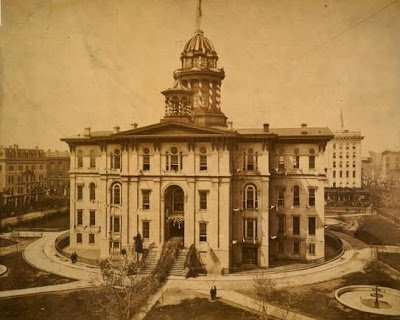 The doors didn’t open to the general public until 6:00 p.m. that day. Inside visitors were presented with a colorful patriotic display tempered by mourning as they approached the president’s remains. It was dimly lit, but enough of Lincoln could be seen so as to both gladden and shock the mourners who filed past. Below is an image of a print which gives a general idea of how it appeared. 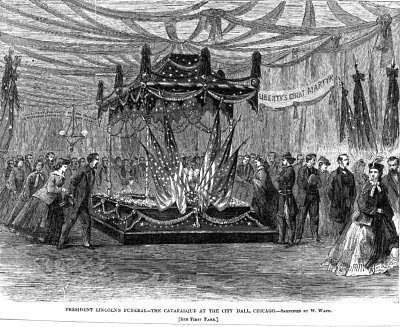 The doors to the courthouse remained open through the entire night and until late in the evening the next day, May 2, 1865. Roughly 7,000 mourners per hour saw the president’s remains.
At 8:00 p.m. on May 2, the funeral procession reformed to travel the route in reverse. Three thousands torches lit the way in the darkness as the hearse carried Lincoln’s remains back to the Funeral Car. The eleventh funeral was over now. There was one funeral remaining, to be held in Springfield, when Abraham Lincoln would at last come back home.