Book Review: A New Birth Of Freedom: The Visitor 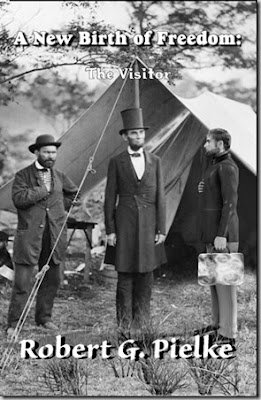 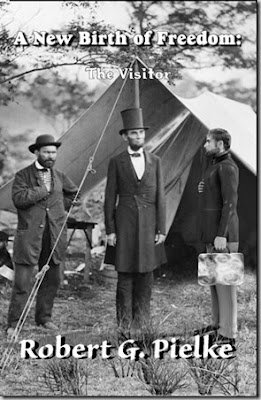 In 1849, an Illinois politician is departing Washington City to return home to the prairie after a single term as a member of Congress. The tall, gangly man is accompanied by no one, until a strangely dressed man approaches him to ask if he can sit with him. The second man holds an usual shiny metallic valise (or case) and wears clothing not of the era.

The awkward Illinois politician is, of course, Abraham Lincoln. The stranger is Mr. Edwin Blair, a man with a request of Mr. Lincoln. The catch is, this request is for a meeting with Lincoln in 1863, on June 27th, 14 years in the future.

Thus the reader is introduced to “A New Birth Of Freedom: The Visitor” a novel which combines factual and alternate history, as well as science-fiction. The result is an interesting, fun, and even, at times, gripping book featuring Abraham Lincoln, members of his cabinet, the Civil War, and a visitor who has come

Without giving too much away, Edwin Blair is a professor of history from the (very) distant future, three hundred years in Lincoln’s future, to be exact. He has traveled to Lincoln’s era to seek help in combating a new kind of enemy during the U.S. Civil War, an enemy of both the Union and the Confederacy. Indeed, an enemy to the entire planet.

The author of this unusual book is Robert G. Pielke, who lives in Claremont, California. He holds a B.A. in History, a Masters of Divinity in Theology, and a Ph.D. in Social Ethics. This widely diverse education has enabled Dr. Pielke to write this novel which will apparently raise important questions for the reader and for society as a whole.

I had a difficult time putting this book down. It’s well-written, the factual history is spot on, and the science-fiction (of which I am a fan) is incredible and thought-provoking.

The book is the first in a planned trilogy (I think). The next book is titled “A New Birth Of Freedom: The Translator.” While I don’t know the planned release date for this next volume in the series, I hope that the date is not too far off. I cannot wait to read it! And of course, I highly recommend the current book featured in this review.

The publisher is Altered Dimensions, an imprint of Cyberwizard Productions in Texas. The photo is from the cover of the book. If you look closely, you’ll see that the character of Edwin Blair and his shiny valise has been digitized into this famous photograph of Lincoln. The book is available for purchase on amazon.com

As usual in the book reviews here on The Abraham Lincoln Blog, I have received no compensation from the author or publisher, with the exception of a copy of the book in question.