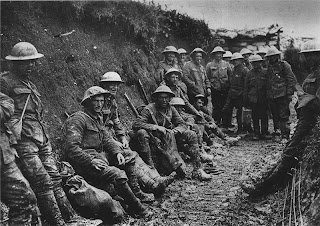 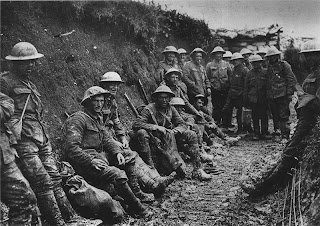 Here he describes the trenches in Belgium and at the undesirable job of being on a ‘Ration Party’.

They seemed to me long, dark, dismal days, those days spent in the Douve trenches; longer, darker and more dismal than the Plugstreet ones. Night after night I crossed the dreary mud flat, passed the same old wretched farms, and went on with the same old trench routine. We all considered the trenches a pretty rotten outfit; but every one was fully prepared to accept far rottener things than that. There was never the least sign of flagging determination in any man there, and I am sure you could say the same of the whole front.

And, really, some jobs on some nights wanted a lot of beating for undesirability. Take the ration party’s job, for instance. Think of the rottenest, wettest, windiest winter’s night you can remember, and add to it this bleak, muddy, war-worn plain with its ruined farms and shell-torn lonely road. Then think of men, leaving the trenches at dusk, going back about a mile and a half, and bringing sundry large and heavy boxes up to the trenches, pausing now and again for a rest, and ignoring the intermittent crackling of rifle fire in the darkness, and the sharp “phit” of bullets hitting the mud all around. Think of that as your portion each night and every night. When you have finished this job, the rest you get consists of coiling yourself up in a damp dug-out. Night after night, week after week, month after month, this job is done by thousands.

As one sits in a brilliantly illuminated, comfortable, warm theatre, having just come from a cosy and luxurious restaurant, just think of some poor devil half-way along those corduroy boards struggling with a crate of biscuits; the ration “dump” behind, the trenches on in front. When he has finished he will step down into the muddy slush of a trench, and take his place with the rest, who, if need be, will go on doing that job for another ten years, without thinking of an alternative. The Germans made a vast mistake when they thought they had gauged the English temperament.