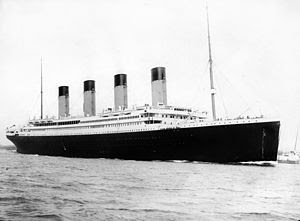 It was 11.40 pm , on April 14, 1912, when the warning call came from the crow’s nest of the Titanic. Immediately, the liner swung to port – but not soon enough. The Titanic scrapped along the jagged edge of an iceberg.
On the bridge, officers congratulated themselves on a near-miss. But below the water line, the Atlantic Ocean poured in through a 300 foot gash in the ships side. 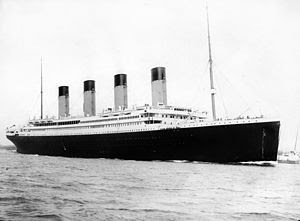 George Rowe, was one of the quartermasters on the Titanic. This is how he describes the crash.
“The first time I knew of the disaster was when I felt a peculiar shiver run through the vessel. It became icy cold and my breath froze in the air. Then I saw the iceberg – and I shall never forget it.
At first I thought we had hit a windjammer as I caught a glimpse of something sliding past the ship on the starboard side. In the glare from the lights of thousands of portholes , the smooth surface looked just like a wet canvas.
I ran over to the side and realised that I was looking at an iceberg. It was so big that it seemed to fill the sky. It was a giant among icebergs and towered menacingly even above the bridge.
For a few seconds I gazed at it unbelievingly. It was just a few feet away and I felt I could have touched it. Then it was gone – swallowed up in the blackness.”

1,513 men, women and children lost their lives that night, ‘swallowed up in the blackness.’